The Spirit for the Remnant

Joel had warned Judah and Jerusalem about a terrible invasion which proved imminent: a horde of “locusts” unlike anything anyone had ever seen would ravage the land, leaving nothing left but mourning and lamentation (Joel 1:1-2:17). They could have been actual locusts; they could be a reference to the marauding Assyrians. Regardless the land would eventually be made desolate; Judah and Jerusalem would be ravaged and then exiled. Joel had extended hope and promise for a future day in which YHWH would restore His blessings upon Judah and Jerusalem and they would obtain all they had lost and then some (Joel 2:18-27). Yet this hope paled in comparison with the promise to come.

After these things, Joel promised, YHWH would pour out His Spirit on all His people: their sons and daughters would prophesy, their old men would have dreams and young men would see visions, and even the servants would have the Spirit of YHWH poured out on them (Joel 2:28-29). Wonders would be seen in heaven and on earth: blood, fire, smoke; the sun would become dark and the moon would be turned to blood before the great and terrible day of YHWH (Joel 2:30-31). All who would call upon YHWH on that day would be delivered; on Zion and in Jerusalem would come those who would escape on the day of trial, the remnant called by YHWH (Joel 2:32).

Joel’s prophecy has generated a lot of interest, excitement, and speculation. Most interest has focused upon the middle section and the spectacular imagery of the sun going dark, the moon turning to blood, fire, smoke, and the like. People have looked to the heavens for the fulfillment of these portrayals, expecting some sort of eclipse or grand astronomical spectacle to herald the coming of the day of YHWH. But is that what Joel’s prophecy is really about?

Joel had already spoken of the sun and moon as being darkened before the coming of the locust horde in Joel 2:10; when given the burden of Babylon, Isaiah envisioned the coming of the day of YHWH against them with the darkening of the sun, moon, and stars (Isaiah 13:9-11). Later on in Joel the image of sun, moon, and stars as darkened on the day of YHWH will reappear (Joel 3:14-15). Jesus would appropriate the imagery as He described the impending day of YHWH against Jerusalem in Matthew 24:29 and Luke 21:25-26.

The darkening of the sun, the moon turning to blood, and the presence of smoke, blood, and fire heralded the Day of YHWH. Ancient people had a tendency to understand eclipses and other astronomical signs as portending calamitous events; YHWH thus spoke of calamitous events in terms of astronomical signs. Joel had already prophesied of a Day of YHWH against Judah and Jerusalem, possibly fulfilled in a terrible pestilence of locusts, possibly fulfilled by the Assyrian horde (Joel 1:1-2:27); many prophets foretold the terrible Day of YHWH against the Northern Kingdom of Israel at the hands of Assyria and the Kingdom of Judah at the hands of Babylon (cf. Amos, Hosea, Jeremiah, Ezekiel). They also expected a Day of YHWH against their oppressors: both Assyria and Babylon would experience their own collapse (cf. Isaiah, Jeremiah, Nahum).

Amos was right: no one should look forward to a Day of YHWH; it is quite unpleasant business (Amos 5:18-20). Through pestilence, plague, famine, drought, and sword, thousands would die and many more would be displaced or cast into exile. The Day of YHWH would be YHWH’s judgment on His people or on their oppressors, and most would not remain unscathed. Only a remnant would remain; and so it would be for Israel after the ravages of Assyria and Babylon.

While the middle section of Joel’s prophecy is vivid in its portrayal, it proves consistent with similar messages within Joel’s own message and among the other prophets as well. Ultimately Joel’s promises at the beginning and end of this section prove more unique and powerfully compelling for future generations.

The remnant, those who would escape, would call upon YHWH and find deliverance in Him, finding refuge on Mount Zion and in Jerusalem; upon all of these YHWH would pour out His Spirit. Throughout the covenant between God and Israel the Spirit of YHWH had come upon only select people, generally the prophets. The situation regarding Eldad and Medad is instructive (Numbers 11:26-30): Eldad and Medad began prophesying in the camp, and when Moses was told of it, Joshua wanted Moses to forbid them, yet Moses wished that all of YHWH’s people were prophets, and YHWH would put His Spirit upon all of them. Joshua wished to uphold the status quo among the people of God; Moses yearned for all Israel to receive the Spirit of YHWH.

Through Joel YHWH gave hope; one day Moses’ desire would come to pass, and all the people of God would receive His Spirit, and find deliverance in Him. As Christians we have complete confidence regarding the fulfillment of Joel 2:28-32: God accomplished it on the day of Pentecost in 33 CE, when Peter solemnly testified before Israel that the outpouring of the Spirit on the Apostles of Jesus is what Joel had prophesied (Acts 2:16-21).

The Day of YHWH would come upon Jerusalem forty years later, but its fate was sealed with Jesus’ and then Peter’s proclamation. The great transition had taken place; God had established a new covenant with Israel, and ultimately all mankind, through the life, death, resurrection, and ascension of Jesus of Nazareth (Acts 2:22-36, Hebrews 7:1-9:28). Jesus had set all men free from the curse of the Law and gave life in this new covenant (Romans 7:1-4, Galatians 3:10-14). Now, all who heard the Gospel of the Lord Jesus, put their trust in Him, confessed that faith, and repented of their sin could now call upon the name of the Lord in baptism and receive forgiveness of sins (Acts 2:38, 22:16). In so doing they would find refuge on Zion and in Jerusalem; not the physical places in Israel, but the spiritual reality in Jesus’ Kingdom (Hebrews 12:22-24). All who were baptized into Christ were baptized into the one Spirit of God, and received the gift of the Spirit (Acts 2:38-39, 1 Corinthians 12:13).

Joel’s famous prophecy became reality; Moses’ great desire had come to pass. The Spirit of YHWH would not fall only on a select few; all believers would have access to God in His Spirit, the down payment and earnest of their salvation, something denied to most Israelites (2 Corinthians 5:5, Ephesians 1:13-14, 2:18-22). Thus, in Christ, all come before God with equal standing and value; all could be priests to God in Christ, all maintaining equal citizenship in His Kingdom (Galatians 3:28, Philippians 3:21, Colossians 3:11, 1 Peter 2:3-9). The old covenant was in stone; the new covenant is in the Spirit of God (2 Corinthians 3:1-18). May we all come to God in Christ, find salvation by calling on His name, and live in the Spirit of our God so as to obtain the resurrection of life! 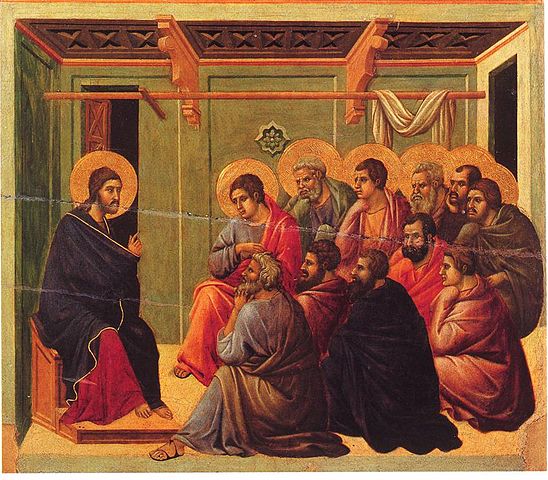