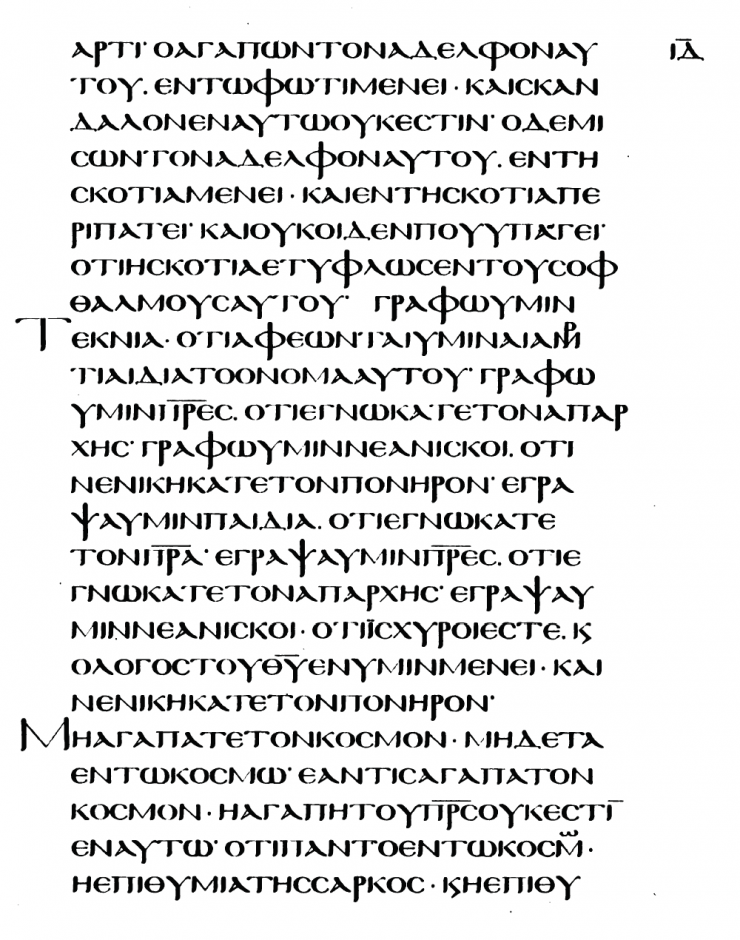 Whosoever is begotten of God doeth no sin, because his seed abideth in him: and he cannot sin, because he is begotten of God. In this the children of God are manifest, and the children of the devil: whosoever doeth not righteousness is not of God, neither he that loveth not his brother. For this is the message which ye heard from the beginning, that we should love one another: not as Cain was of the evil one, and slew his brother. And wherefore slew he him? Because his works were evil, and his brother’s righteous. Marvel not, brethren, if the world hateth you (1 John 3:9-13).

As John has progressed through his letter, he has been demonstrating the differences between true believers and false teachers: true believers walk in the light, do Jesus’ commandments, walk in His ways, and do not sin, while false teachers have departed from the faith and have done and justified wickedness (1 John 1-2). In 1 John 3:3-8, John continued this contrast: believers in God are pure and do righteousness, while those who sin are of the devil.

We must take care not to distort John’s message in 1 John 3:9. John’s statement should not be read as a declaration that Christians never sin: Romans 3:23 and 1 John 1:8 work against such a view. The English Standard Version’s translation is preferable: No one born of God makes a practice of sinning, for God’s seed abides in him, and he cannot keep on sinning because he has been born of God. Christians, being fallible, will stumble; but when they stumble, they will get up, repent, and strive again, and not make sin a habit (cf. Hebrews 10:26-31). True Christians will recognize the distinction between right and wrong and turn toward the light (Hebrews 5:14).

John begins a transition in 1 John 3:10 to his next subject: how Christians are to treat one another. John notes that it is not just those who do not practice righteousness that are not of God, but also those who do not love their brothers. John indicates that this is the case in verse 11 because they have heard the message “from the beginning,” that they should love one another. This confirms that John speaks regarding love in 1 John 2:7-8 when he speaks there regarding the “‘new’ old commandment.” God has desired for human beings to love one another from the beginning of time, but it is within Jesus Christ that we see the ultimate demonstration of love, as John will continue to make clear in 1 John 3-4. If Jesus Christ is the ultimate demonstration of love, it stands to reason that only those who love can be in God, and those who do not love have no share in God!

John then appeals to the example of Cain in Genesis 4:1-8 in 1 John 3:12. Cain and Abel both offer sacrifices; Abel’s is accepted, Cain’s is rejected, and the text never tells us why. John intimates that Cain’s deeds, which likely includes his sacrifice, were evil, and that was the reason that he was rejected. This is consistent with the text in Genesis, considering that Cain’s reaction to his rejection is not to repent and do what is right but instead to kill his brother and add sin upon sin. Because of this, Cain is said to be of the evil one, and we ought not be like him!

John demonstrates powerfully that we should love one another: those who do not love their brethren are not of God, and such ones are akin to Cain, of Satan, committing evil deeds. And then John turns, in 1 John 3:13, and says that Christians should not be surprised when the world hates them.

The connection should be evident. Jesus Himself warned His disciples, John included, that the world would hate them (Matthew 10:21-26). This is because people are under the spell of the Devil and do his work, for their deeds are evil (John 8:34-47). Those who do what is right and follow after God represent a threat and convict their consciences.

John demonstrates to us that we are all part of the conflict of love versus hate, and we must decide who we shall follow: God and love or Satan and hate. Let us work on the side of love and follow God today!