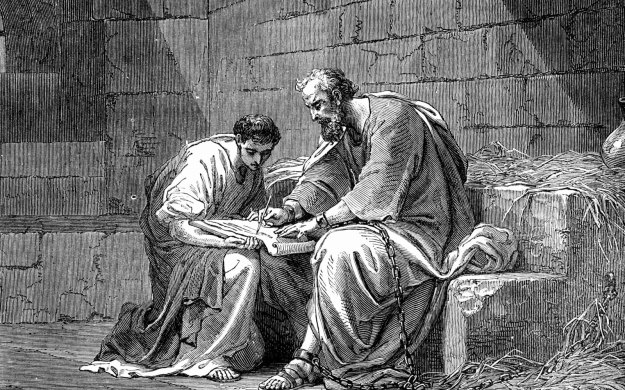 Paul was only one person; he could not be in multiple places at once. He had business elsewhere; Timothy would be able to handle the situation in Ephesus. Until he could visit them again Paul sent instructions to Timothy regarding himself, his work, and what to do in Ephesus; we call this letter 1 Timothy.

Paul’s first letter to Timothy is the fifteenth book in modern editions of the New Testament; along with 2 Timothy and Titus, 1 Timothy is considered one of the “pastoral letters,” featuring counsel for preachers in how to work among the people of God. Paul is listed as its author (1 Timothy 1:1); it would seem as if he wrote the letter personally. Pauline authorship of 1 Timothy is strongly contested by scholars on the basis of style and content. Nevertheless Christians of the late second century believed it to be genuine, and differences in style and content can be easily explained in terms of Paul’s later age and different audience. The letter is undated; Paul had visited Ephesus and left Timothy there to work while he traveled on to Macedonia (1 Timothy 1:3), and most likely wrote 1 Timothy soon afterward. This may fit the context of Acts 20:1-6 (ca. 57 CE); otherwise it reflects events which take place after Paul’s (presumably first) imprisonment in Rome, ca. 61-63 CE. Paul wrote to Timothy to exhort him to preach the Gospel and regarding his conduct and the conduct of Christians in the household of God.

After a standard greeting (1 Timothy 1:1-2), Paul began by setting forth how Timothy should conduct himself among the household of God (1 Timothy 1:3-3:15). Paul reminded Timothy of the reason he was left in Ephesus: to charge certain men to not teach Jewish mythological doctrines (1 Timothy 1:3-4). Those who would preach and teach should do so to lead to love from faith and conscience; these men swerve from it, not fully understanding the law they would teach, for the law is for the unrighteous, not the righteous (1 Timothy 1:5-11). Paul spoke of his own conversion and God’s mercy upon him: Jesus came to save sinners, of which Paul is foremost (1 Timothy 1:12-17). Paul then gave Timothy the same charge, to fight the good fight of faith; others, like Hymenaeus and Alexander, have shipwrecked their faith (1 Timothy 1:18-20).

Paul encouraged Timothy to provide a series of specific exhortations. Prayers and supplications were to be made for all men, especially those in authority, so Christians could live tranquil and quiet lives; God wanted all to be saved; Jesus is the Mediator between God and man, a ransom for many, of whose Gospel Paul was commissioned to preach (1Timothy 2:1-7). Men everywhere were to pray without anger or argument (1 Timothy 2:8). Women were to dress modestly, learn quietly, and not exercise dominion over men on account of Adam and Eve (1 Timothy 2:9-15). Paul spoke highly of the work of overseers and set forth their qualifications (1 Timothy 3:1-7). He continued with the qualifications of deacons and their wives (1 Timothy 3:8-13). Paul hoped to see Timothy soon, but if he were delayed, this writing would set forth how people were to behave in the household of God, the pillar and support of the truth; Paul then provided a “hymn” speaking of the Lord Jesus (1 Timothy 3:14-16).

Paul continued to exhort Timothy regarding what he should preach and teach. He warned Timothy of those who would give heed to doctrines of demons, forbidding marriage and restricting foods God made to be eaten with thankfulness and sanctified in prayer (1 Timothy 4:1-5). If Timothy insisted on these things, he would be a good servant of Jesus; he should avoid myths and fables; bodily exercise profits little, but spiritual exercise endures forever (1 Timothy 4:6-11). Timothy must give no reason for others to despise his youth, but to live as an example of the faith, giving heed to teaching and Bible reading, not neglecting his gift, but giving diligence, paying heed to what he taught for his benefit and that of those who heard him (1 Timothy 4:12-16). Paul spoke of how Timothy should treat various Christians in different life situations and addressed the condition of widows at length, delineating between younger widows and “widows indeed,” the qualifications of widows to be supported by the congregation, and the importance of marriage for younger widows; Paul expected believers to take care of their families, and Christian family members to take care of widows in their extended family (1 Timothy 5:1-16). Paul commended good elders, addressed how charges against them should be handled, expected Timothy to act impartially, to not lay hands on anyone quickly, to drink some wine for his stomach ailments, and spoke about how all sin would be exposed, sooner or later (1 Timothy 5:17-25). Christians who were slaves should honor their masters, especially those whose masters were of the faith (1 Timothy 6:1-2).

Paul again warned about the coming of false teachers and set forth their expected behavior, sensual and seeking monetary gain from godliness; godliness is great gain if paired with contentment; love of money is the root of all kinds of evil (1 Timothy 6:3-10). Timothy was to flee covetousness but pursue righteousness and fight the good fight of faith: hold firm to the confession of Jesus and do His commandments (1 Timothy 6:11-16). Christians with means ought to trust not in their riches but God and be rich in good works (1 Timothy 6:17-19). Paul concluded by pleading with Timothy to avoid the profane babblings of what was called gnosis, or knowledge, by means of which many had swerved from the faith (1 Timothy 6:20-21). Paul ended with a standard epistolary conclusion of grace (1 Timothy 6:21).

Paul’s exhortations to Timothy proved prescient; to this day they remain sound exhortation for all those who seek to follow the Lord Jesus, especially those active in preaching and teaching. May we all hold firm to the truth of God in Christ, shun false teachings, and fight the good fight of faith, like Paul and Timothy!

Works of the Flesh: “Things Like These” Having warned them regarding the danger of apostasy...