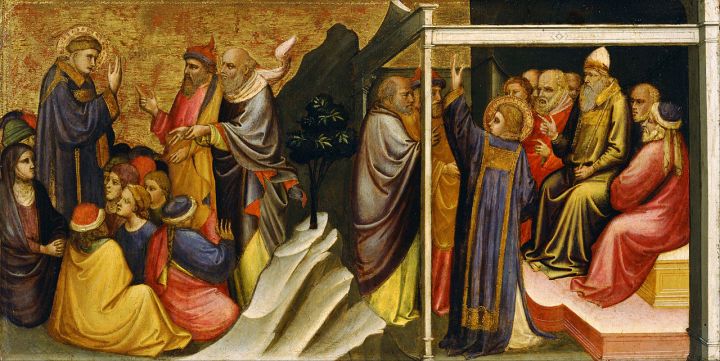 Early Christians went about proclaiming Jesus as Lord, bearing witness to what the Apostles had seen and heard regarding His life, death, resurrection, ascension, and imminent return (Acts 1:8, 1 Corinthians 15:1-20). At other times they were brought before human authorities and were called upon to make a defense, or apology, for their conduct and way of living. We can learn much from these apologies in the book of Acts.

The Apostle Peter made two defenses before the Sanhedrin in Acts 4:8-12, 5:29-32. At both opportunities Peter spoke humbly yet boldly before the Sanhedrin, indicting them as guilty of the blood of Jesus, testifying how they had seen Jesus raised from the dead, and firmly planning on persisting in preaching Jesus as the Risen Lord. Peter’s defense was a good offense, and both times he overcame the Sanhedrin through faith, boldness, and conviction. Stephen would also make a defense before the Sanhedrin in Acts 7:2-53. Stephen also maintained a bold posture, rhetorically putting the Sanhedrin on trial: he explored Israelite history in rejecting the leaders God had given them and cast aspersions on the Temple, and indicted them as the children of their ancestors who had killed the Christ. As a result the members of the Sanhedrin flew into a rage and killed Stephen, who remained faithful to Jesus to the end, and became the first recorded martyr for the Way (Acts 7:54-60). The Apostle Paul was called upon to make no fewer than six defenses in Jerusalem and Caesarea: before the Jewish people, before the Sanhedrin, before Felix, before Festus, and before Agrippa (Acts 22:1-21, 23:1-6, 24:10-21, 25:9-11, 26:1-29). At times Paul provided the testimony of what Jesus had been accomplishing through him to explain himself; at other times Paul attempted to clear his name of the charges against him. Yet each time he would declare the continuity of his belief: he had come to understand that Jesus was the fulfillment of all God had promised Israel through the prophets. He affirmed his standing as an Israelite while upholding Jesus as Lord and Christ.

In all of these examples the early Christians generally embodied Peter’s maxim in 1 Peter 3:15: they gave answers for the hope that was in them, yet did so with courtesy and respect. When they recognized they stood before earthly authorities, they provided them the honor due them. Yet they never compromised their convictions, nor did they shy away from saying controversial and uncomfortable things to those in power. Peter and Stephen indicted the Sanhedrin for having killed the Christ sent by God (Acts 4:10, 5:30, 7:51-53). Paul testified that God in Christ had indeed sent him to proclaim salvation to the Gentiles (Acts 22:21, 26:17-20). They all proved willing to suffer whatever the earthly authorities had decreed; Stephen even suffered an extrajudicial death, and in the process did not hurl invective about the unrighteousness of it all, but modeled Jesus by asking for their forgiveness (Acts 7:54-60).

All these early Christians would offer some level of a defense for their conduct. Peter explained himself as acting according to what he had seen and heard (Acts 5:30-32). Within his proclamation Stephen did answer all of the charges brought against him while casting aspersions on the entire endeavor (Acts 7:2-53). Paul made it clear he did not introduce an uncircumcised Gentile into the Temple, and pointed out how his opponents could not prove their charges (Acts 24:10-12). The authorities recognized that Paul had done nothing worthy of imprisonment (Acts 26:30-32).

Nevertheless, in their defenses, these early Christians were never as invested in defending themselves as they were in proclaiming Jesus the Crucified and Risen Lord. Peter anchored all he did in his witness of Jesus as raised from the dead (Acts 4:8-12, 5:30-32). Stephen embodied the same posture, and shared in the same condemnation, as the Lord Jesus (Acts 7:54-60). Paul shrewdly appealed to the Sanhedrin as one on trial regarding the resurrection of the dead, and won some sympathy from Pharisees who affirmed the resurrection (Acts 23:6-9). Herod Agrippa II saw through Paul’s defense by testimony, perceiving that Paul was attempting to persuade him to become a Christian (Acts 26:28).

After the days of the Apostles early Christians still went about proclaiming the Gospel to all who would hear, and they would also be called upon to make a defense of their faith and hope before the authorities. As the faith spread and the lies and slander about it increased, some Christians wrote out defenses, ostensibly written to the Roman authorities of the time but really intended for a wide audience among the Greco-Roman pagans. Notable examples include the anonymous author of the Letter to Diognetus, Justin Martyr’s First and Second Apologies, Athenagoras’ Embassy for the Christians, Minucius Felix’s Octavius, and Tertullian’s Apologeticus. In these writings early Christians defended the integrity of the Christian faith, the authenticity of their witness, their value as subjects of Rome while explaining their inability to serve the ancestral gods, and an appeal to consider Jesus as the Risen Lord.

We may not be called upon to give a defense for our faith and hope before civil authorities, but Christians today do well to be prepared to make such a defense before their fellow man (1 Peter 3:15). One such way of making a defense is to provide testimony of how God has worked in and through your life to accomplish His purposes, as Paul testified in Jerusalem and before Agrippa. Nevertheless, the focus of the defense is never on us and our behavior, but on what God has accomplished in Jesus. Our defense in hope and faith ought to include our confidence in the apostolic witness to Jesus’ life, death, resurrection, ascension, and imminent return. Our defense should be done with courtesy and respect, but its message might well cause controversy and discomfort, for by it many may be convicted of their sins and disobedience. May we stand firm for our faith and make a defense just as the early Christians did, and share in their hope of eternal life in the resurrection in Christ!

Bible Translations, I: History of Translations Anyone who would seek to learn more about the...

Bible Translations, V: Dynamic Equivalence Versions People have translated the Bible, in part or in...