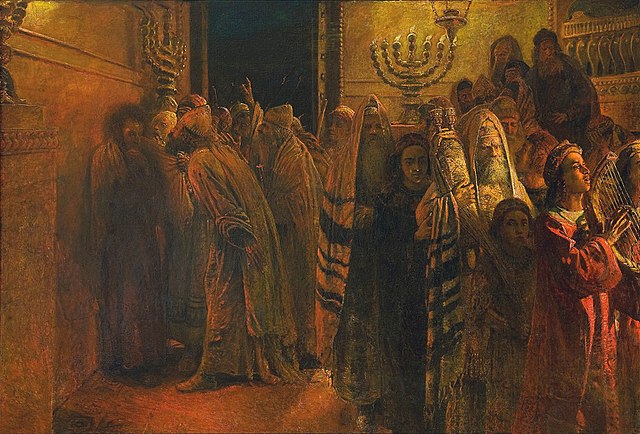 Apologies in Acts: Peter Before the Sanhedrin

Challenges and persecution arose almost as soon as the Gospel began to sound forth in Jerusalem. Those who had condemned Jesus to death were not too keen on having an insurrectionist message of His resurrection causing trouble. How would the Apostles respond?

Luke included many examples of the preaching of the Gospel in the book of Acts: Peter on the day of Pentecost, in the Temple, and before Cornelius, and Paul in Antioch of Pisidia and on Areopagus (Acts 2:14-31, 3:12-26, 10:34-43, 13:15-51, 17:22-31). Yet Luke also recorded many instances of “apologies” in the book of Acts: not an “apology” in the common sense of the term today in English, as if the Apostles were expressing remorse and regret about anything, but according to the Greek apologia, generally translated as “defense” (cf. Acts 24:10, 25:8, 16). Such apologies were given in the context of some kind of examination or trial before Jewish and Roman authorities. The Apostles would manage to proclaim the Gospel of Jesus, particularly His resurrection, in their apologies; yet as a defense for the hope that was in them and their conduct, we do well to examine the apologies in Acts in their own right. The genre proved popular; many early Christians would write apologies for the faith in the first three hundred years of the faith.

The first apologies in Acts were given soon after the Gospel began to be proclaimed in Jerusalem. Peter and John had gone up to the Temple to pray and had healed a man well-known in the Temple precinct as one born lame (Acts 3:1-10). Based upon this miracle Peter proclaimed Jesus risen from the dead and the fulfillment of the hope of Israel before the multitude (Acts 3:11-26). The captain of the guard and the Sadducees, having heard of the tumult, came and had Peter and John arrested because they were vexed by them proclaiming the resurrection of the dead (Acts 4:1-3). The Sanhedrin gathered the next morning, and inquired of Peter and John by what authority they had acted and preached (Acts 4:5-7).

Peter then set forth his apology, or defense, for John and himself (Acts 4:8-12). He appealed to his audience and established the facts of what had been done: they are being examined for doing a good deed for a disabled man (Acts 4:8-9). Peter then confessed the man was made whole in the name of Jesus Christ of Nazareth, whom they, both the Sanhedrin and all the people of Israel, had crucified, and God had raised Him from the dead (Acts 4:9-10). Peter then spoke of Jesus as the fulfillment of Psalm 118:22-23, the stone rejected by men but made the cornerstone (Acts 4:11; cf. Mark 12:10-12, 1 Peter 2:6-8). Peter concluded with a powerful declaration: salvation cannot be found in anyone else or in any other name under heaven (Acts 4:12).

Peter stunned the Sanhedrin: they perceived his and John’s boldness and how they were common men (“unearned and ignorant,” not trained rabbis), marveled, and perceived they had been with Jesus (Acts 4:13). They could say nothing against them, since the healed man stood in their midst, and it was evident a great miracle had taken place (Acts 4:14-16). They decided to threaten Peter and John, charging them not to speak or teach in Jesus’ name (Acts 4:17). Peter answered for them to judge whether they should hearken to them rather than God, for they could not stop speaking of what they had seen and heard (Acts 4:19-20).

Peter and John were let go (Acts 4:21). The Apostles continued preaching and teaching, and would again raise the jealousy and ire of the Sanhedrin (Acts 5:12-17). This time all the Apostles were arrested (Acts 5:18); an angel opened the doors of the prison and exhorted them to speak in the temple the words of this Life (Acts 5:19-20). The Sanhedrin again summoned the Apostles, and the high priest spoke to them regarding how they were charged not to teach in the name of Jesus, and yet not only did they keep teaching, but they were also bringing Jesus’ blood upon the Sanhedrin (Acts 5:27-28).

Peter again spoke an apology (Acts 5:29-32). He began with a more succinct and direct statement than seen in Acts 4:19: they must obey God rather than man (Acts 5:29). Peter did not shrink back: he declared that God raised Jesus up, the very Jesus they had killed by hanging Him from a tree (Acts 5:31; cf. Deuteronomy 21:22-23). God exalted Jesus to be a Prince and Savior, giving repentance and remission of sins to Israel; the Apostles were witnesses of these things, as was the Holy Spirit, given by God to those who obey Him (Acts 5:31-32).

The Sanhedrin was enraged at Peter’s teaching; only by Gamaliel’s wise speech were they allayed (Acts 5:33-39). The Apostles were beaten, were charged again to not speak in Jesus’ name, and were released (Acts 5:40-41).

Peter’s apologies before the Sanhedrin maintained great consistency with Peter’s preaching in Acts 2:14-36, 3:12-26: the Apostles as witnesses, Jesus as killed by the Jewish people and the authorities but raised from the dead, exalted by God, made Lord and King, the fulfillment of prophecy, and the only source of salvation. Yet before the Sanhedrin these teachings take on greater sharpness and force: the Pharisees denied the possibility of the resurrection of the dead, the whole Sanhedrin was most directly responsible for Jesus’ death, and the Sanhedrin claimed to be an authority over the Jewish people (Mark 12:18, 14:53-65). Peter did not shrink away from these uncomfortable truths, nor did he attempt to sugarcoat it or make it seem more palatable to them. He spoke boldly, powerfully, but concisely and uprightly.

We also do well to consider the behavior of Peter and the other Apostles after each instance of harassment and persecution by the Sanhedrin. After Peter and John returned the first time they prayed to God, understanding how the Sanhedrin was working with the Roman authorities in a conspiracy against Jesus and God’s work in Him, and prayed for boldness to proclaim the Gospel (Acts 4:23-31). After they were all beaten by the Sanhedrin the next time, they rejoiced they were counted worthy to suffer dishonor for the Name of Jesus (Acts 5:41). The Apostles did not rage against the injustice; they did not respond immaturely, as if surprised at persecution or imagining they should not have to endure suffering. They recognized that following Jesus would lead to the same kind of sufferings Jesus endured, and recognized that in suffering thus they were sharing fellowship with the Christ (Matthew 16:26-29).

Peter did well in making his defense for what he believed and did (cf. 1 Peter 3:15-16). He spoke with respect yet with conviction. The Sanhedrin heard the Gospel of Jesus’ resurrection; they were forced to grapple with their complicity in His death. They had done all they felt they had the ability to do against the Apostles, yet their threatening and warning were toothless. The Apostles continued to teach and preach Jesus as the Risen Lord and did many mighty works in His name. The nations indeed rage against God and His Anointed One; God reigns supreme, and He is glorified in those willing to suffer harassment, humiliation, and trials while steadfastly bearing witness to what God has done in Jesus. May we make a defense for our faith before all who inquire, and absorb shame and humiliation in Jesus so as to obtain exaltation in the resurrection!