Acts of the Assembly: Praying

Else if thou bless with the spirit, how shall he that filleth the place of the unlearned say the Amen at thy giving of thanks, seeing he knoweth not what thou sayest? For thou verily givest thanks well, but the other is not edified (1 Corinthians 14:16-17).

Praying before the Father in the assembly of the saints is one of the great privileges God has granted to followers of His Son Jesus. Such prayer provides a great opportunity to build up and strengthen fellow Christians in the faith.

In general, prayer involves direct communication with God. God expects Christians to communicate with Him continually in prayer, giving thanks to Him, praising His name, and submitting their requests, cares, and anxieties before Him (1 Thessalonians 5:17-18, Hebrews 13:15, 1 Peter 5:6-7).

Prayers in the assemblies of Christians are group or guided prayers, in which one man speaks on behalf of the whole congregation, and the congregation provides their assent to its message by concluding the prayer with “Amen,” a Hebrew word meaning “so be it” (cf. 1 Corinthians 14:14-17). In so doing, they make the prayer as their own.

To this end both the one leading the prayer and those being led in prayer must strive to pray effectively and in an edifying way. The one leading the prayer does well to remember that he is praying on behalf of the group and to speak accordingly. According to 1 Corinthians 14:14-17, such a prayer should be marked by giving of thanks: while it is still appropriate to make requests of God in the prayers of the assembly, giving thanks to God for what He has already done, is doing, and for the hope in the promises of what will be should feature prominently in the prayer. The prayer also should be understandable, spoken so that everyone who is present can hear and understand what is being said so that all can assent with “Amen” and can be edified and encouraged by it.

Those being led in prayer should focus on the prayer as it is being offered, internalizing the words, so that each one can in good conscience declare “Amen” at the end of the prayer, assenting to it as if they had said it themselves. In this way the prayer in the assembly becomes a collective or corporate prayer, spoken by one, but shared by all.

As with all prayers, prayers in the assembly are to be petitions to the Father in the name of the Son Jesus (cf. Matthew 6:9, John 14:13-14). The prayer need not be drawn out with all sorts of repetitions, as Jesus warns in Matthew 6:7-8: God knows what we need before we ask.

The prayer must be meant: while prayers in the assembly will be similar to each other week in and week out, just as our diets often feature the same food, nevertheless, if a prayer involves saying words just to go through the motions, God is not honored. Those praying in the assembly should be on guard against praying in order to be seen by men, petitioning God in such a way as to try to impress those in the assembly rather than speaking with God: as Jesus says, such will have their reward (Matthew 6:5).

Prayers in the assembly are opportunities for the congregation to thank God and lay their petitions before Him in one voice. We should ever be thankful for this privilege and take advantage of it to build one another up and praise and honor God in Christ! 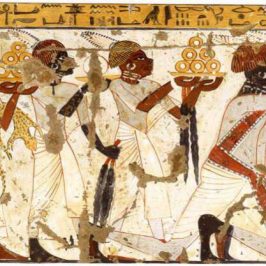