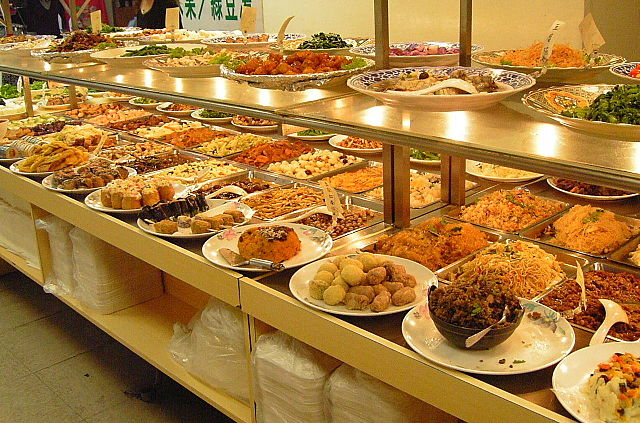 Choice is one of the most highly prized values of many Americans. We feel confined and perhaps even oppressed if we believe our choices are about to be restricted even though we are often overwhelmed by the number of choices available to us for everything from toothpaste to restaurants. Therefore it should not be surprising that Americans feel very strongly about choice in terms of religious ideas, beliefs, and practices.

American religion, while always being a melting-pot of diverse faiths, has lost much of its definition. As with other aspects of society, religion has been thoroughly democratized. Loyalties to specific religious denominations or groups has dissolved. These days people choose whether to believe and then what to believe. Few boundaries prove too difficult to overcome for Americans; they will often pick and choose beliefs from a kaleidoscope of various faith traditions. In short, Americans seem to value cafeteria-style religion.

Cafeteria-style religion is an understandable result of the core values of American society. Americans believe that it is best for everyone to believe as they wish without governmental interference. Americans also have come to not just value tolerance of different belief systems but also relativism: no one has a monopoly on truth, different truths can be found in different religions, and the truth of each individual is his or her own truth and need not be the truth of any other. Furthermore, Christianity is considered “old-fashioned” and “traditional” while Eastern religions like Hinduism, Buddhism, and Confucianism are different, “new” to us, and therefore more “exciting.” And since Americans have always been skeptical of authority figures, the idea of a God who dictates what is right and wrong absolutely is a challenge, and it is easier to explore one’s own spirituality. It is no wonder, therefore, that so many create their own religion out of different pieces from major belief systems!

There is one commendable aspect to all of this, and that is how people are willing to investigate religious claims. Such investigation is good and profitable (cf. Acts 17:10-11, 27). But that investigation is to have a goal: the discovery of truth, not just constant investigation (2 Timothy 3:7)!

The Bible teaches that the message of Christianity is to go out to all peoples and they are to decide for themselves whether they will serve God or will reject Him (Matthew 28:18-20, Acts 13:45-46). God will bring everyone into judgment for this decision (Romans 2:5-10), but Christians should not compel anyone to believe by force. While there is no compulsion, we must also declare that Christianity cannot properly be cut up into different pieces, accepting some and rejecting others, while accepting other aspects of different religions. Cafeteria-style religion may be popular among Americans, but the New Testament indicates that we do not decide what is right and wrong, but live according to God’s standard of right and wrong. Jesus declared the following regarding Himself:

This is an exclusive claim that demands full acceptance or rejection. We are not given an opportunity to vacillate or attempt to sit on the fence; either Jesus is the truth or He is a lie. There is no middle ground; we must either accept or reject Jesus as the Christ, the Lord, the Son of God.

Many hear such a statement and believe it overly arrogant. Yet, if we understand what Jesus is saying in context, it is not arrogant at all. Jesus is showing His disciples that if they have seen His great deeds and wonderful teachings, they have seen the Father in Him (cf. John 14:7-12). Jesus claimed to be God in human form, the Word made flesh (John 1:1, 14, 8:58). God the Son has fully declared God the Father in word and deed (John 1:18). If this is true, then Jesus’ claim is natural, understandable, and worthy of acceptance: since God is the Creator and has established His rules for the creation, if Jesus has completely manifested the way of God and is God, He is the embodiment of truth and life, and His life shows us the way!

This means that Jesus and His written revelation is our standard. Is it true that we will discover some truths in other religions? Absolutely! But those elements are not true because they are part of those religions, but because they are in alignment with the will of God as revealed in Jesus Christ (Ephesians 1:3-11, 2 Timothy 3:16-17). If we understand that Jesus of Nazareth is a most compelling figure, and worthy of imitation, then we cannot participate in “cafeteria-style religion.” Instead, we must follow the path of Jesus wherever it leads (1 John 2:6).

The past few decades have seen the flowering of the belief that most churches are the same regardless of their denominational heritage, and so Christians should be able to “shop” around for churches to find the best “product” to suit their needs. For far too many “churches,” the assemblies are more like shows or entertainment than they are times for Christians to come together to strengthen one another. God has commanded Christians to assemble with one another to build each other up and to partake of the Lord’s Supper (Acts 20:7, Hebrews 10:24-25), and to work together in local assemblies to build up the Body of Christ (1 Corinthians 12:12-27, Ephesians 4:11-16). Too many have the mindset that their Christianity or that Christianity itself is based in its assemblies, when in reality, assemblies represent the time of strengthening necessary to live the Christian life (1 Corinthians 14:26, Hebrews 10:24-25). Christianity involves individual believers being conformed to the image of Christ (Romans 8:29), of which assembling with fellow believers is a part. Participation in the body of Christ and a local church demands agreement on what God has revealed as true in Jesus Christ and to work and serve together in community (1 Corinthians 1:10, 12:12-28, Philippians 2:1-4); we will not be able to glorify God if we maintain a consumer mentality about His church.

Cafeteria-style religion may be fashionable but there is no indication that it will save anyone in the wrath to come. Instead, we encourage you to seek after New Testament Christianity, looking to Jesus who is the truth and working with other believers who do the same (1 John 1:5-2:6). Let us learn truth from Jesus, for our own ways cannot save (Jeremiah 10:23)!