The Christian and Evil

“The line separating good and evil passes not through states, nor between classes, nor between political parties either – but right through every human heart” (Aleksandr Solzhenitsyn, The Gulag Archipelago).

We have a very complex relationship with evil, to put it mildly.

We recognize that evil exists and do all we can to avoid or escape the evils we are willing to admit and to see. And yet we find ourselves easily ensnared and overthrown by the evils we cherish in our fears and insecurity.

We are repulsed, disgusted, and horrified by the effects of evil upon people and the environment. Meanwhile, Western entertainment is saturated with displays of evil behavior. Many people seek out this entertainment precisely on account of the horror and the violence. Movies without such things rarely make as much money as many that do. News stations know stories featuring blood, gore, and fearmongering elevate ratings; stories featuring humanitarianism and charity do not.

Most of humanity recognizes the existence of evil as a major problem and look for some kind of solution. Plenty of rulers have gained prominence by identifying other people as evil, and have promised to rid the world of such evil. After all the purges are done and the foe is vanquished, however, evil endures and remains. It has even thrived.

As Christians we will not escape evil in this life; we do well to expect to endure it and seek to do so in mature ways which glorify God in Christ.

Christians must dispense with the pretense that evil is a problem we can solve, fix, or eliminate through our diligent efforts. The potential of evil was stitched into the fabric of the creation: God made the tree of the fruit of the knowledge of good and evil in the Garden of Eden (Genesis 2:17); for the choice to love to mean anything, a choice to turn away from love proved necessary. The Bible confesses that evil is not good and will not have the victory, but it does not pretend that evil is some kind of optional problem we can fix. For that matter, the Bible does not speak of some kind of disembodied, abstract thing called “evil”: evil is seen as the choice to turn away from God, His goodness, and His ways, a choice made by many spiritual and physical beings (e.g. Romans 1:18-32, 2 Peter 2:4). We do well, therefore, to recognize that “evil” is not some “thing” out there, but rather an inclination within all sentient beings.

The challenge and difficulty of evil is far greater than we care to admit. The creation has been corrupted by sin, decay, and death (Romans 8:17-23). We far too easily and often perceive the evil, sin, and ugliness in others, but fail to see evil, sinful, and ugly thoughts, feelings, and behaviors in ourselves. We all have sinned and fallen short of the glory of God (Romans 3:23); we all continually struggle with impulses toward evil (1 John 1:8-10). If God were to seek to eliminate all the evil in the creation, all humanity would be gone!

On our own we cannot stand before the face of the forces of evil. According to Paul, we really are not wrestling with fellow human beings: our contest and struggle is with powers and principalities, the rulers over this present darkness, the spiritual forces of wickedness in the heavenly places (Ephesians 6:12). We have good reason to believe that Satan is at the head of these powers and principalities (Ephesians 2:2). Such is why Paul told Christians to be strong in the Lord’s might (Ephesians 6:10); we cannot stand in our own strength!

If the potential of evil has always existed, we have all done evil things, and evil is not some kind of amorphous thing “out there” but rather a tendency that exists within each and every one of us, fueled by powers and principalities well beyond our strength, what are we as Christians to do?

The Lord Jesus provides Christians with the way forward so as to overcome evil. Jesus triumphed over the powers and principalities by enduring and suffering all the violence, degradation and humiliation they could inflict upon Him (Colossians 2:14-15). When He was reviled, He did not revile in return; when He suffered, He entrusted Himself to God who judges justly, and sought the good for those who did Him harm (1 Peter 2:18-25).

If we would overcome evil in ourselves and in the world, we must go and do likewise. We must put to death what is worldly in our lives, and look to Jesus for strength and wisdom to persevere in righteousness (Colossians 3:1-17). We must pick up our cross and follow Jesus, even if it costs us our goods and even our lives (Matthew 16:24-25). Where there is hatred, we must display love; where there is despair, we must cultivate hope; where we find depravity, we must point to redemption in Jesus (Matthew 5:20-48, Romans 1:16, 5:6-11).

We will never defeat the forces of evil; it is enough for us to stand firm in our faith and resist them (Ephesians 6:10-18). Jesus has gained the victory over them through His death and resurrection; in our faith we have begun to share in that victory, in our sufferings we testify to that victory, and when our bodies are given life again we will fully share in that victory (1 Corinthians 15:53-58). Thanks be to God for His suffering to overcome the forces of evil and to redeem us from all evil; may God deliver us from the Evil One, and save us in Jesus Christ!

How Shall Jacob Stand? Amos was sent to prophesy a warning of doom and condemnation... 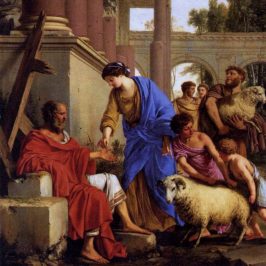 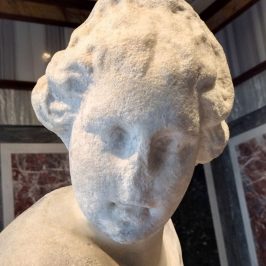