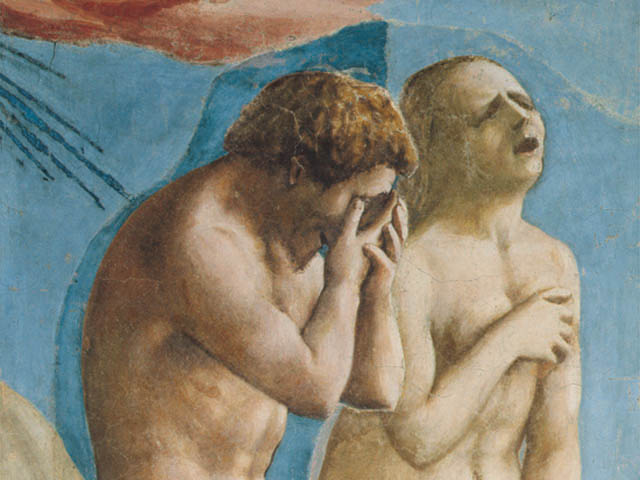 Christianity and the Fall

In the beginning, God created the heavens and the earth (Genesis 1:1). God made man and woman in His image and likeness; they, as the rest of God’s creation, were very good (Genesis 1:26-27, 31). And yet the serpent deceived Eve into eating the fruit of the tree of the knowledge of good and evil, thus proving disobedient to God’s command and committing transgression; she convinced Adam to eat of it as well (Genesis 3:1-6). As a result of this disobedience the creation was cursed by God. The serpent would slither on the ground, strike man’s heel, and man would strike his head (Genesis 3:14-15). Women would experience pain in childbirth; they would desire to rule over their husbands, but their husbands would rule over them (Genesis 3:16). The earth was cursed with futility: man would have to work the ground to obtain food for bread despite thorns and thistles, and he would die and return to the dust from which he had been taken (Genesis 3:17-19). Adam and Eve’s transgression is often known as “the Fall of Man,” or just “the Fall”; to this day we as Christians must come to grips with its consequences.

Satan, as the serpent, had struck at mankind, but God extended the hope that a Human One would strike his head, and so early Christians understood the work of Jesus of Nazareth in His life, death, and resurrection (cf. Genesis 3:15). In Romans 5:12-18 and Romans 8:18-24 the Apostle Paul explained what took place in the Garden of Eden and in Jesus’ death and resurrection. God had indeed created a good creation; it was not at all God’s desire for sin and death to corrupt His creation. But when Adam transgressed, sin and death entered the world. All mankind would suffer the consequences of sin: many would participate in sin itself and warrant eternal separation from God and condemnation in the process (cf. Romans 3:23, 6:23); all would suffer the consequences of sin and be subject to death, even those who were personally morally innocent and clean. The creation itself was subjected to corruption; death reigned from Adam until Jesus. Jesus is a type of Adam: by living righteously and without sin and dying on the cross for our transgressions, His one sacrifice is able to cleanse all the unrighteousness which derived from Adam’s transgression (cf. 1 Peter 2:19-25, Hebrews 7:1-9:28). As in Adam all die, in Christ we all have the hope of life: Jesus is the firstborn of the new creation in His resurrection, having overcome death (cf. 1 Corinthians 15:20-58). Paul went so far as to say that the Christian is a new creation in Christ (2 Corinthians 5:7).

Early Christians, therefore, understood mankind’s problem in its ultimate terms: sin and death have corrupted the world, all human conflict, misery, and suffering derive from sin and death, and the only place for deliverance from sin and death is faith in Jesus and confidence in His life, death, and resurrection. Jesus is Lord and has overcome sin and death; in Him we have the hope of doing the same (Romans 8:1-4). Not for nothing, therefore, does John see in Revelation that Christians will obtain the glory of God in His presence for eternally, and such is envisioned as a return to paradise and the Garden, with the tree of life and the river of the water of life (Revelation 22:1-5). Jesus of Nazareth has taken on the curse (Galatians 3:10-14); in Him we can overcome the curse and the Fall; in Jesus we can participate in new creation and new and eternal life.

Nevertheless, present reality proves to complicate matters considerably. Jesus has died and is risen indeed, and yet the present creation continues in its cursed state. The creation remains subject to corruption and decay; snakes still slither and bite people; women still suffer pain in childbirth and continue to engage in power struggles in the marital relationship; men must still work to make food from tilling the soil; we all still physically die. How can these things be if Jesus’ death and resurrection means we have gained the victory over sin and death in Him?

The Apostles understood these challenges well. They recognize that Christians remain in a condition best understood in terms of “now” and “not yet.” Our salvation is “now”: in Christ we can have the forgiveness of sins and eternal spiritual life in the present (Acts 2:38, Romans 6:3-7, 8:10). At the same time, our salvation is “not yet”: we await Jesus’ return in order to obtain its fullness, the redemption of the body (Romans 8:18-24, 1 Peter 1:3-9). The creation eagerly awaits its deliverance from corruption; it cannot happen until the final enemy, death, is fully defeated, and such will not happen until the Lord Jesus returns (Romans 8:18-24, 1 Corinthians 15:20-28). Christians, therefore, must live in hope, confident that as Jesus overcame sin and death, if we trust in Him, we will also overcome sin and death both now spiritually and on the final day physically!

Christians live in the hope of the resurrection while enduring the difficulties of this present creation on account of the Fall. The serpent has been thrown down and can no longer accuse us, but we still suffer from his temptations to sin and persecution from hostile forces (1 Peter 5:8, Revelation 12:7-12, 13:1-18). In the resurrection there will be no need to marry or give in marriage, but until then men and women still marry and are given in marriage, and gender roles for men and women remain (Matthew 22:30, 1 Corinthians 11:1-3, 14:33-35, Ephesians 5:23-33, 1 Timothy 2:9-15). On the final day we will rise and be transformed incorruptible and immortal; until then, we remain subject to physical death (1 Corinthians 15:50-58, 1 Thessalonians 4:13-17).

God created a very good creation. Man has sinned and fallen short of God’s glory and has been cursed. Through Jesus God is setting all things right; in Christ we are a new creation, yet subject to the corruption, decay, and failings of the old. Only on the final day will we be fully liberated from the consequences of the Fall. May we put our trust in God in Christ and eagerly pray for and hasten the day of Jesus’ return!