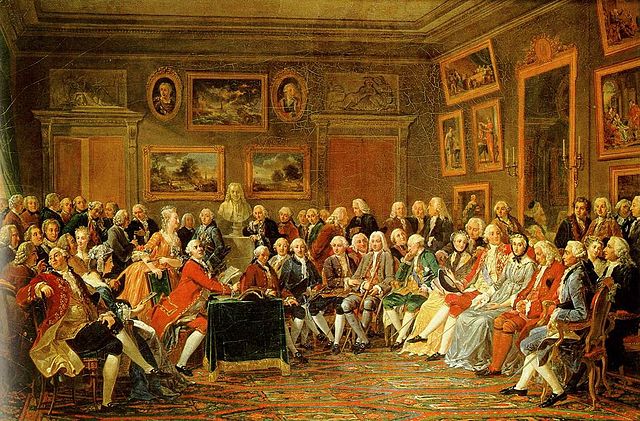 Every society and culture, by necessity, maintains a set of ideas about the way the world and humans operate. These operating assumptions are often spoken of as “worldviews,” and they tend to shape and form how people look at themselves and their relationship to the world around them. Worldviews do not remain static; they often can shift and adapt to new discoveries or the development of new ideas.

The modern Western world remains saturated by the assumptions and perspectives of modernist rationalism as developed during the Enlightenment (ca. 1650-1800). It would be impossible to fully condense all of the various aspects of the Enlightenment into one theme; nevertheless, the entire project was animated by high confidence in the ability of humans to use reason to come to a better understanding of reality through dedication to the advancement of knowledge in research and study. Such is the pretense of calling the movement the “Enlightenment”: a belief that knowledge and reason “illuminated” what had been shrouded by ignorance and superstition. In this way we have inherited the Enlightenment paradigm: the deeply held assumption that the main problem with humanity is ignorance, which often leads to superstition. The solution, according to the Enlightenment paradigm, is to abolish ignorance and superstition with knowledge. If people have the right knowledge, so this theory goes, they will then adapt and modify their behaviors and do the right thing.

We can see this paradigm at work in many aspects of life. Why do our political opponents disagree with us? We often believe it is because they have been deceived and remain in ignorance, for if they truly understood the situation like we do, they would agree with us. How do we expect people to better themselves? They are able to better their station through education. How do we handle potential dangers, like the use of recreational drugs? We launch programs to educate young people about the dangers of recreational drugs so they can learn to avoid them. One of the flashpoints of the modern “culture war” involves to what extent, and how, young people are to be educated regarding sexual behaviors.

The Enlightenment paradigm has also affected the thinking and assumptions of many of the people of God. Christians do well to insist on “book, chapter, and verse” for what we preach, teach, and practice, but it has become very easy for Christians to frame issues and challenges in terms of a lack of information or instruction. What happens if many Christians fall prey to a certain sin or temptation? It is assumed that there was insufficient teaching against it. Why do many churches not have elders? Many believe that insufficient instruction on the nature and importance of elders is the primary fault. What is our default reaction whenever we see a Christian falling deeply into some sin or falling away from the Lord? “They ought to know better.” Even our general approach seems influenced by the Enlightenment paradigm: we see our mission primarily as providing instruction. We thus maintain the implicit assumption that if people are given the right information, their ignorance will be dispelled, and they will naturally start thinking, feeling, and doing the right things.

Perhaps the most extraordinary aspect of the Enlightenment paradigm is its success. The way we live today is profoundly shaped by the scientific and technological advancements which have proceeded from the Enlightenment. In many respects ignorance and superstition were causing great difficulties and hindrances to human flourishing; wherever education has been emphasized, a higher quality of life has followed. In many respects there is no return from the Enlightenment; we cannot recapture the spirit of the “pre-critical” age which came before it.

For that matter, the Enlightenment paradigm is not entirely wrong. Knowledge is absolutely necessary to affect change, and ignorance has often led to superstition and unhealthy behaviors. Paul preached that God would overlook the times of ignorance but now calls on everyone to repent (Acts 17:30); God would have all people come to a knowledge of the truth of the Gospel of Christ and be saved (1 Timothy 2:4). As Christians we are to proclaim the good news of Jesus’ life, death, resurrection, ascension, and imminent return, and that proclamation has the power to transform lives (Romans 1:16, 2 Timothy 4:1-4). Sometimes people do fall into sin, or do not sufficiently practice what is right, because it was not emphasized in teaching; as Christians we must continually exhort in instruction regarding righteousness and sin (cf. Titus 2:1-15).

We can see how the witness of Scripture confirms the necessity of the knowledge of what God has accomplished in Jesus and how it should transform our lives in Christ; nevertheless, Scripture equally testifies to the insufficiency of knowledge on its own. Humanity fell because Adam and Eve ate from the fruit of the tree of the knowledge of good and evil: knowledge puffs up, while love builds up (Genesis 3:1-23, 1 Corinthians 8:1). The Apostle Paul went so far as to say that knowledge is precisely the means by which sin sometimes ensnares us: when we learn that we are not to do a thing, we are then tempted to do that thing in rebellion (Romans 7:5-25). Our minds, feelings, and actions have been corrupted by sin (Romans 5:12-21, 8:18-23); knowledge can be used for evil as much as for good. We absolutely can “know better” when we sin, and yet do it anyway!

We can see the limitations of the Enlightenment paradigm in both the world and among the people of God. Plenty of people have knowledge about healthier forms of living, yet for a wide range of reasons persist in unhealthy and destructive behaviors. Many recreational drug addicts went through drug prevention programs, and ultimately fell into drug addiction anyway; a few perhaps were made aware of the possibility of drug use precisely through those programs! Many young people commit to sexual abstinence and “know better” about sexual immorality and yet commit sexual immorality anyway. As Christians we know what thoughts, feelings, and behaviors are sinful, and yet often fall into them anyway (1 John 1:8, 2:1). Many a preacher has made a point to teach the distinctive nature of the people of God, the importance of elders and their role, and have diligently sought to fulfill Titus 2:1-15, and yet see Christians renounce their distinctiveness, fall into sinful patterns of behavior, and either fall short of the standards of the eldership or have little desire to aspire to or maintain such a role.

The Apostle Paul has warned us about being seduced by the philosophies of man and no longer holding firm to the Lord Jesus in Colossians 2:8-9, and such a warning is prescient in regards to the Enlightenment paradigm. The Enlightenment paradigm is insufficient to explain human behavior; its commendable understanding of the importance of knowledge is overcome by its absolute insistence on knowledge as the solution with ignorance as the problem. In Christ we recognize that the problem of humanity is sin and enslavement to the powers and principalities over this present darkness (Romans 7:5-25, Ephesians 6:12); the solution is the victory God has accomplished through Jesus’ life, death, resurrection, ascension, and imminent return, and trusting not only in Jesus as Lord, but proving willing to follow in His footsteps of love, humility, and suffering (Matthew 16:24-27, Romans 8:17-18, Ephesians 3:1-13, Colossians 2:15, 1 John 2:3-6). May we seek to be the community of the people who seek to embody Jesus the Messiah, find victory over sin and its forces in Him, and obtain the resurrection of life!

The End of Assyria Ashurbanipal might have reigned over the Assyrian Empire at its greatest...