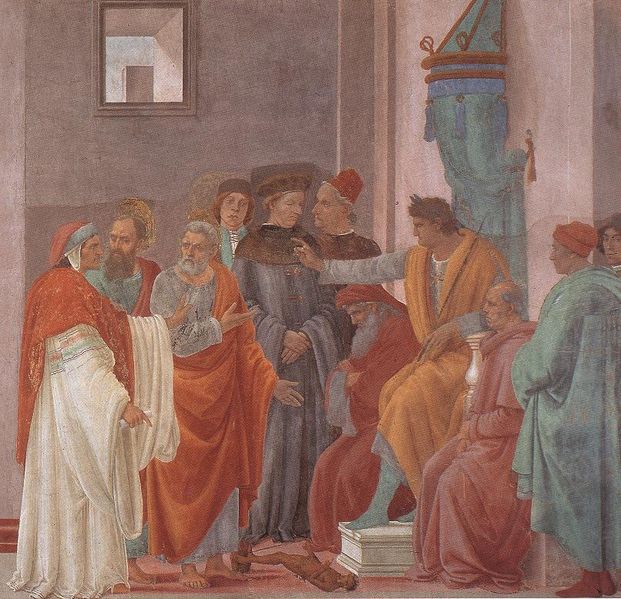 People these days are hearing a lot about “fake news”; it has become a concern across the political spectrum. “Fake news” feature reports which may invent stories and pass them off as real or provide such a slanted portrayal of a real story as to become warped and distorted. Such “fake news” is propagated in order to reinforce an existing worldview, to slander a person or an opposing worldview, and generally to perpetuate a particular ideology or support for a particular person. Regardless, such stories end up serving as lies which alienate people from each other and detach them from reality.

In the first century the Apostle Paul grew increasingly concerned about a different kind of “fake news” which was propagated among the Christians in Galatia. He had preached to them the good news, or the Gospel, of Jesus the Christ: in Christ all could be saved from their sins and be reconciled to God, whether Jewish or Gentile (cf. Acts 13:13-14:23). But afterward others came among the Christians and proclaimed a different message: yes, God was willing to save Gentiles, but they had to submit to circumcision and the Law of Moses and essentially become Jewish in order to obtain that salvation (Galatians 4:8-10, 5:1-2, 12). Paul called this message a “different gospel,” one that really was no “gospel,” or good news, and that those who proclaimed such a thing or accepted it would be anathema, or accursed (Galatians 1:6-9, 5:1-5). Paul vigorously refuted this fake gospel, strongly emphasizing God’s justification of the believer by faith and the freedom of the believer in Christ from bondage to the Law (Galatians 3:1-5:12).

A few years later the Apostle John felt compelled to condemn another fake gospel propagated in the region of Asia Minor. Some who had accepted the true Gospel of Christ had fallen prey to those who suggested they had special, deeper knowledge of Jesus. They claimed Jesus was never really a human, but only seemed to be. John recognized this view for what it was: if Jesus were not truly human, He was never really born, and thus never really died, nor could be raised from the dead. If that were true then Christianity was a fraud (cf. 1 Corinthians 15:12-20). By denying Jesus’ humanity, this fake gospel denied Jesus’ death and resurrection, and so those who worked to promote this fake gospel were against Christ, or antichrist, and faithful Christians were to have nothing to do with them (1 John 2:18-27, 4:1-4, 2 John 1:6-9).

These two “fake gospels” derived from different sides of the ideological spectrum but ultimately served similar purposes. People attempted to make sense of the message of the Gospel according to their pre-existing cultural assumptions and conditions: either to make better sense in terms of Judaism or in terms of Greek philosophy. Instead of changing their ideas to fit the Gospel, they changed the Gospel to fit their ideas. The resulting message may have seemed more palatable to those who promoted it and it may have gained adherents. Yet, as Paul noted, a fake gospel is no good news at all; it cannot save; it leads a person away from the truth and toward condemnation (Galatians 1:6-9)!

Unfortunately fake gospels were not merely a first century difficulty. Ever since many have arisen and have proclaimed fake gospels, accommodating the Gospel message to different sets of cultural assumptions and biases.

God gave all authority to the Lord Jesus (Matthew 28:18-20); Jesus gave authority to the Apostles to bind and loose on earth what had been bound and loosed in heaven (Matthew 18:18). That authority could not be passed on to any other; none afterward could have seen the Lord Jesus in His life, death, and resurrection (cf. Acts 1:20-22). And yet some have presumed Apostolic authority was given to a series of men over time, and the changes and adaptations to the Gospel message they promoted are valid and binding. Such is a fake gospel; the true faith in Jesus was delivered once to all Christians, and the Gospel message of Jesus and His Kingdom does not change over time (Jude 1:3).

Paul rightly insisted that justification of believers was by faith and not works of the Law (Galatians 3:1-29). Some have taken Paul’s message to the extreme, suggesting believers are saved by faith alone and will be saved no matter what they do. Such is a fake gospel; the Gospel is designed to lead to the obedience of the nations, living under grace demands obedience to the truth, faith without works is dead, and the person who turns away from the Lord will be condemned (Romans 1:5, 6:1-23, Hebrews 10:26-31, James 2:14-26).

While much regarding what will take place in the end times is mysterious, Jesus and the Apostles insisted on the return of the Lord on the final day on which the dead would rise, be judged, and obtain either the resurrection of life or the resurrection of condemnation (John 5:28-29, 1 Corinthians 15:20-58, 1 Thessalonians 4:13-5:11). Yet some suggest the resurrection is already past, having found some kind of spiritual fulfillment when Jerusalem was destroyed. Such is a fake gospel, a denial of the resurrection of the believers, considered gangrenous by Paul (2 Timothy 2:16-18).

These are but a few of the many fake gospels which have been promoted over the past two thousand years. They tend to sacrifice the whole truth so as to over-emphasize certain elements of truth, or accommodate the message to fit prevailing cultural presuppositions. The result, however, is always the same: the fake gospel is no longer the good news of Jesus’ life, death, resurrection, lordship, and return, and therefore has no power to save. And yet few wish to recognize this today, having been seduced by the fake gospel of ecumenism: all such gospels reflect imperfect understandings but will not ultimately matter, and all who adhere to them will still be saved. We would like for this to be true; it certainly fits prevailing cultural views regarding tolerance and inclusion. And yet if the messages preached before the Galatians and those in Asia Minor were not only called fake gospels and antichrist but even explicitly condemned along with those who believe in and teach them, how can we believe that fake gospels today are any different? Let none be deceived: fake gospels exist and pose a significant danger to people in the twenty-first century. May we reject all fake gospels and accept only the pure Gospel of Christ as made known in the pages of Scripture!

Biblical Authority and the Old Testament The presently composed universe and the Bible reveal that...