Gods of This World: “Mother Nature”

For that they exchanged the truth of God for a lie, and worshipped and served the creature rather than the Creator, who is blessed for ever. Amen (Romans 1:25).

Humans have always been awestruck by the majesty, unpredictability, and sheer power of the natural forces around them. Those forces allow humans to live but they can just as easily turn hostile toward humanity.

Humans have never lacked at least a group of their own people who have considered nature a god or goddess. To this day we tend to speak of nature as “Mother Nature,” a remnant from a time when people believed that the earth was their mother goddess. Many other peoples have divinized the forces behind and around nature: the sun, rivers, streams, trees, and so on and so forth.

Here we have perhaps the most ancient idolatry: literally making gods out of the elements of this world or this world itself. As Paul indicates in Romans 1:18-25, it is the result of people perceiving the creative power of God and divinizing that power as it is manifest in various forms. The creature, the creation, is served, and the Creator is neglected or forgotten.

It is true that as Christianity grew and developed “nature religions” faded, but now in the early twenty-first century we are seeing a resurgence in service of the creation rather than the Creator. While this service may not be rendered before physical idols it is no less idolatrous and no less dangerous in its consequences.

In many ways this is not surprising. For two hundred years the position of God as Creator has been questioned and challenged by many within the scientific and philosophical communities. When people move away from understanding the Creator and His purposes for His creation, their understanding becomes darkened (cf. Romans 1:18-28), and since people invariably find some “god” to serve, there is a return to nature service.

God created the heavens and the earth and made man in His own image according to Genesis 1:1-2:3. The universe is upheld by His power, and nothing happens on this planet without His knowledge (cf. Matthew 10:29-30). According to the Biblical view of the world, all that we see represents God’s creation, and humans, while being part of the creation, have been uniquely endowed with God’s image, seeking after their Creator to give Him praise (Acts 17:26-27).

But what of the views of many today? Many have little, if any, room for a Creator God in their belief system. As they see it, humanity is just the most recent “development” in an evolutionary system, superior to other animals only on account of that “development.” In this view, since humans were not created by a god but just evolved, man is really just an overdeveloped animal, and should be expected to act as an animal.

Since people have rejected the view of a Creator God who continues to sustain the world by His power they are always confident that we are on the cusp of some apocalyptic disaster that will destroy us all. For many, animal life has as much value as human life. Man’s dignity hits a new low.

As Paul makes plain in Romans 1:18-32, the question of whether God is the Creator of the universe or not is of great consequence. When God the Creator is rejected there is no end to the immorality and darkened understandings of humanity. Therefore it is critical for us to remember that while the forces of nature and nature itself are awe-inspiring, beautiful, and terrifying, that they are not God, but point to the majesty and power of the Creator God (Psalm 19:1, Romans 1:19-20 etc.). We may find peace and rest in nature, and there is value in communing with God there, but we must also commune with our fellow believers who represent God’s Temple (cf. Ephesians 2-20-22, etc.). We derive the ability to live from “mother earth,” but “mother earth” is no goddess, and is entirely dependent on her Creator God for her continued existence. Let us praise God the Creator and seek Him! 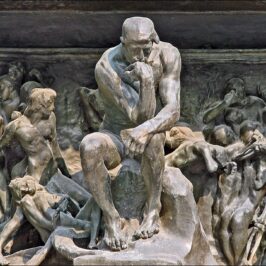