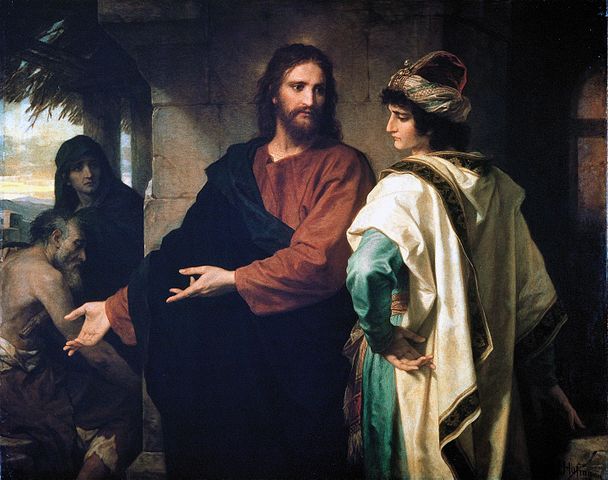 In the world we often hear people categorized according to a binary: there are “good” people and there are “bad” people, the “good guys” and the “bad guys.” We have been told, for instance, that the only thing that will stop a “bad guy with a gun” is “a good guy with a gun”; there are “good cops” and “bad cops”; politicians and their supporters will attempt to persuade the “good people” of the nation regarding the dangers that the malevolent Other would like to impose upon the nation. It seems convenient that the “good” people are those who are with us, and those who are against “us” are made to look “bad” in various ways. It is always tempting and seductive to maintain the childhood simplicity and fantasy of the world and categorize people as either “good” or “bad.” As Christians we must be extremely wary regarding this temptation.

God has maintained a consistent witness in the New Testament regarding humanity: they have all done badly. In Luke 11:13 Jesus spoke of His disciples as being “evil,” particularly in comparison with God and the good gifts He gives. The Apostle Paul powerfully demonstrated in his argument from Romans 1:18-3:8 the conclusion found in Romans 3:9: all are under sin. In Romans 3:10-19 Paul arranged a pastiche of quotations from the Hebrew Bible testifying to humanity’s participation in evil, leading to the pithy declaration of Romans 3:23: all have sinned. Paul attested in Romans 1:18-32 the sad state of humanity lost and given over to depravity in their minds in their sinfulness without repentance. In the sinful condition all submit to the powers and principalities of this present darkness, live in the passions of their flesh as children of wrath, hate others and are hated in turn (Ephesians 2:1-3, Titus 3:3). The wages of such sin is death, and humanity experiences such pain, distress, and death in spades (Romans 6:23). To this end we can appreciate and understand the possibly apocryphal story told of G.K. Chesterton, who, having heard of an inquiry by The Times of London asking what was wrong with the world today, responded simply, “I am.”

While the Scriptures attest that all have sinned and fallen short of the glory of God, to declare humans as totally depraved and incapable of good on their own goes well beyond what is written. When Jesus spoke of His disciples as “evil,” He did so in the context of describing how they would themselves do good for and give good things to their children (Luke 11:11-13). Jesus recognized and confessed that sinners, tax collectors, and Gentiles love those who love them and do good for those who do good to them (Matthew 5:46-47, Luke 6:31-33).

Thus the Scriptures testify to our condition: none of us is good; only God is good (Mark 10:18). Yet we are not entirely evil, either. No doubt some people are more marked by good than evil, and others by more evil than good; thus Jesus can speak of “the good and the evil, the just and the unjust” in such an accommodative way in Matthew 5:45. Christians therefore must not fall prey to the easy and simplistic binary of “good” people and “bad” people: there are only people, capable of great good and unimaginable evil. As Alexander Solzhenitsyn declared in The Gulag Archipelago, “the line separating good and evil passes not through states, nor between classes, nor between political parties either — but right through every human heart — and through all human hearts. This line shifts. Inside us, it oscillates with the years. And even within hearts overwhelmed by evil, one small bridgehead of good is retained.” Men convicted of terrible crimes still love their mamas. The saintliest person you know still struggles with various forms of temptation to do what is wrong, and sometimes falls short.

Yet should not Christians, at least, be “good people”? Those who are in Christ must never forget from what they have been redeemed: they were sinful, participants in evil, and received cleansing and forgiveness from sins not because of anything they did to deserve it but through the sheer act of grace, mercy, and love displayed by God through Christ on the cross (Ephesians 2:1-10, Titus 3:3-8). Christians should grow in the grace and knowledge of the Lord Jesus Christ, manifesting the fruit of the Spirit and not the works of the flesh (Galatians 5:17-24, 2 Peter 3:1-8). Yet any Christian who says that he or she no longer sins is deceived and the truth is not in them (1 John 1:8 in the present tense; 1 John 1:10 testifies to the same regarding the past). Jesus spoke of the people of God, even His own disciples, as “evil” in Luke 11:13; many of the texts quoted by Paul in Romans 3:10-19 spoke of the people of God at the time. Paul addressed the Corinthian Christians as “saints” in 1 Corinthians 1:2, yet his two letters attested to less than saintly behavior and conduct throughout. Even within mature congregations there would be Christians who generally sought the will of the Lord but would have some dispute or disagreement with fellow Christians, or some would be walking disorderly (e.g. Euodia and Syntyche, Philippians 4:2, 2 Thessalonians 3:1-15). In these letters the Apostle Paul called on all such Christians to repent and change their behavior; nevertheless, for good reason did Paul exhort Christians to faithful conduct in Jesus in every letter he wrote, for a person is not made intrinsically good by becoming a Christian.

Christians easily deceive themselves into thinking they have fully overcome challenges and temptations as they have matured and grown in the Lord Jesus. And yet consider the Apostle Peter. He was appointed by the Lord and the Holy Spirit to be the first to associate with Gentiles and proclaim the Gospel to them (Acts 10:1-48); his testimony proved decisive in recognizing God granted Gentiles access to repentance that leads to life in Christ, and even to remain as Gentiles (Acts 11:1-18, 15:7-11). Peter continued, at times, to associate with Gentile Christians (Galatians 2:12a). Yet even the Apostle Peter in a moment of weakness in fear and anxiety displayed prejudice against Gentile Christians when Jewish Christians arrived in Antioch from Jerusalem and was rebuked by Paul (Galatians 2:11-14). Likewise, the Christians of Ephesus had stood firm in the truth for years, and yet their love for the Lord had grown cold; the Lord warned them they would lose their standing before Him if they did not repent (Revelation 2:1-8). One thus does not become intrinsically good by growing and maturing in the faith. Christians will continually be beset by sin and struggle with temptations to sin. Those temptations may shift and change over time. In times of anxiety, fear, and/or stress, Christians may find themselves succumbing again to temptations to sin they had successfully suppressed for years. As long as we are in the flesh we must stand firm in our faith and be on guard against the wiles of the Evil One (Ephesians 6:10-18, 1 Peter 5:8-9); we are never too old or too mature in the faith to fully transcend the deceitfulness of sin (Hebrews 3:13).

When we were children it made sense for us to categorize people as “good” or “bad”; now that we have grown up to adulthood, we must set aside childish things. There are no truly “good” or “bad” people; there are just people. People who often want to do good but trap themselves in webs of anxiety, deceit, fear, and pleasure (Romans 7:5-25, Hebrews 2:14-15); people who may be relatively self-absorbed but who also want good things for those whom they love and know (Matthew 5:46-47, Luke 6:31-33); and people who are self-deceived into thinking they are what they are not (James 1:22-25). To follow the Lord Jesus in obedient faith will lead to cleansing and forgiveness, and ought to be manifest in righteous thinking, feeling, and acting, but in the flesh Christians remain tempted to sin, have parts of their lives that are not as reformed as others, and are just as able to remain deceived by the powers and principalities and perpetuate various kinds of sins. God is good; may we trust in God in Christ, love one another as God has loved us, and obtain life in Him!