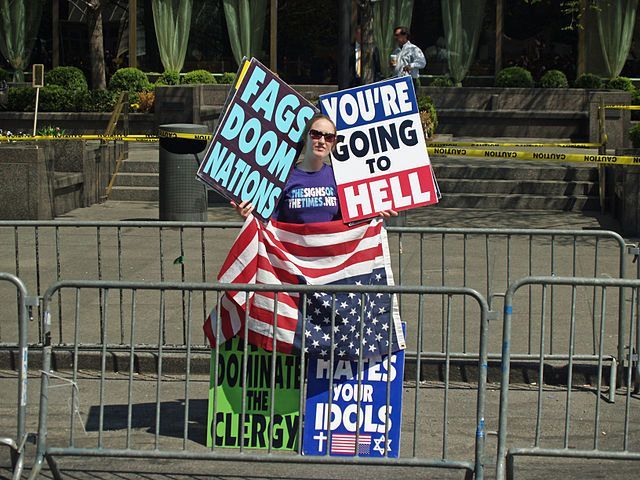 You have seen them out on the streets: men and women holding signs that condemn all sorts of people to hell for various sins. Some will call out passersby, call them names, and tell them they are going to hell. You have heard the sermons that intend to frighten people into submission, the message saturated in wrath and hellfire. Those who do and proclaim such things often seem to revel in confrontation, disagreement, dispute, and denunciation, proving self-satisfied, having “preached the truth hard” and been “persecuted for their righteousness” as a result.

“Hellfire and brimstone” evangelism has a long history, particularly in America: Jonathan Edwards remains famous for his sermon Sinners in the Hands of an Angry God, after all. Yet Edwards preached before a congregation out of concern regarding the salvation of his people. What would lead people to stand on street corners and pronounce such condemnation? Why would preachers not only constantly emphasize the theme, but even elevate its emphasis as a marker of faithfulness?

We do best to give the people who participate in hellfire and brimstone evangelism the benefit of the doubt and not automatically assume selfish or impure motives. They have heard the Bible’s call to proclaim salvation in Jesus Christ to everyone (Matthew 28:18-20). They have read the prophets of the Old Testament and have seen how the prophets denounced the Israelites for their sins. They have heard the belief that America is a “Christian nation” and thus assume everyone should have some knowledge of Christianity and Jesus. Thus, all Americans should know better and should stop sinning. They feel they have a type of “prophetic ministry,” to go and tell Americans about their sins like the prophets spoke to Israel and Jesus to some of the Israelites of His own day.

Likewise, we do well to give the benefit of the doubt to those who believe emphasizing “hellfire and brimstone” in the proclamation of the Gospel. Jesus did warn Israelites about the dangers of hellfire and the outer darkness (e.g. Matthew 5:29-30, 13:47-50, 25:31-46); Paul also warned about the condemnation of the wicked (e.g. Romans 1:18-32, 2 Thessalonians 1:6-10). Throughout time many have wished to suppress or eliminate the doctrine of hell through outright rejection, denial, or simply ignoring the matter by neglect. In response it is tempting to strongly, consistently, and continually preach about hellfire and brimstone to demonstrate opposition towards all who would deny or suppress the doctrine. Many also believe it is healthy to have a strong fear of hellfire and damnation; some remember a day when such preaching would lead some to repent and come to salvation in Jesus.

Israel’s prophets did denounce the Israelites with very strong condemnatory language (e.g. Ezekiel 5:1-17). Yet the prophets spoke to Israel, the people of God. They recognized, and confessed, YHWH as the God of Israel who had brought their ancestors out of the land of Egypt. They served YHWH; they also served other gods and acted like everyone else did in the ancient Near Eastern world, and this latter worldliness was the problem. YHWH warned His people regarding imminent doom in very stark, powerful, and even vulgar terms (e.g. Hosea 1:1-3:5, Ezekiel 16:1-63). Yet God did so out of the pain of betrayal and unfaithfulness, illustrated by the frequent metaphor of Israel as the faithless, adulterous wife. Through the prophets YHWH did also denounce the nations around Israel, but generally because of what they had done to Israel; furthermore, these prophecies were proclaimed to the Israelites, not to the nations themselves (e.g. Isaiah 13:1-21:17, Amos 1:1-2:3).

Jesus also infamously denounced people with sharp condemnation (e.g. Matthew 23:1-36); Jesus warned regarding hellfire more than anyone else in Scripture (e.g. Mark 9:42-48). Yet it is important to keep in mind those to whom Jesus spoke. Jesus did declare how all the unrepentant wicked would be condemned (Matthew 13:47-50), but generally warned Israelites about condemnation (e.g. Matthew 8:11-12, 25:14-41): the people of God, zealous in their devotion to God, yet not entirely according to knowledge. Furthermore, Jesus did not thus denounce the sinners of Israel; He had compassion on the people of Israel, called them to repentance, and they heard Him because He did not treat them the way their religious authorities did (e.g. Matthew 9:9-13). Instead, Jesus denounced those who should have indeed “known better”: the Pharisees, scribes, and other religious authorities, as displayed in Matthew 23:1-36. In a sad irony, the type of people whom Jesus would most strongly warned regarding the dangers of hellfire and brimstone today would be the very people out condemning others themselves.

The Apostles also warned about judgment, especially regarding the condemnation of unbelievers (e.g. Romans 1:18-32, 2 Thessalonians 1:7-10). Yet these warnings were written to Christians, not to unbelievers. Warning about condemnation is a part of the proclamation of the Gospel even among those who do not believe (e.g. Acts 17:30-31), but let us consider how Paul declared it. Paul began by proclaiming Jesus and the resurrection among the Athenians (Acts 17:16-21); he then proclaimed to them the “Unknown God” they had served in ignorance, demonstrating how God is our Creator and cannot be portrayed with an image (Acts 17:22-29). Then, and only then, Paul told them that God would judge everyone through Jesus, and gave assurance of the day of judgment through His resurrection (Acts 17:30-31). Before they could be warned about condemnation, the pagan Gentiles needed to know something about the Creator God and what He had accomplished in Jesus. A picket sign of condemnation cannot provide that kind of understanding.

The United States of America is not, and has never been, a truly “Christian nation.” Its people are not automatically the people of God and should not be treated as such. Americans need to hear the Gospel, including warnings about the judgment day to come, but they must hear the full and complete Gospel, starting with who God is and what He has done for us in Jesus. We cannot assume people understand who God is or that they have sinned or anything else of the sort; to just hear a message of condemnation is not to convey the love of God in Christ.

The Apostles preached and taught among believers regarding judgment and condemnation, and for good reason: Christians ought to be reminded occasionally about the dangers of sin so as to continue resisting against the forces of evil, and to be reinforced in God’s justice and the coming wrath of God against all iniquity (Romans 1:18-32, 1 Corinthians 6:9-11, Galatians 5:19-21, 2 Thessalonians 1:6-9, Revelation 6:9-17, 16:1-21). Those who would preach “hellfire and brimstone” do well to remember how Jesus did so primarily as a warning to those people of God who profess Him but do not follow His commandments (Matthew 25:14-36). The condemnation of unbelievers is explained to demonstrate the sinfulness of all people and to give hope of God’s judgment, not as a reason to cackle and delight in the death of the wicked. We have no basis upon which to insist that “hellfire and brimstone” preaching be a primary means of communicating the Gospel; while it has its place, we must also remember that there is no fear in love, and that perfect love casts out fear (1 John 4:18). “Hellfire and brimstone” preaching can lead many to properly revere God and avoid sin; the same preaching can also traumatize many, especially young children, and continual emphasis can lead to malformed and maladapted faith. Fear can motivate only so much and so far; only love can motivate a person to a full self-sacrificial faith in Jesus (1 Corinthians 13:1-8, 1 John 4:7-21).

There is a place for warning unbelievers about the judgment and the prospect of condemnation, but holding signs and speaking words of condemnation as an evangelism tactic is not appropriate. They must first learn about God our Creator and His work in Jesus before warnings about judgment and condemnation will make any sense. Christians ought to hear preaching about judgment and the danger of condemnation, not to try to establish some kind of bona fides, but out of concern for the souls of people lest they fall away from the faith and fall into the hands of the living God (Hebrews 3:12, 10:31, 12:29). “Hellfire and brimstone” preaching can be potent, and that power must be used responsibly with a clear understanding of its potential deleterious effects when over-emphasized. Jesus came with a warning, but He came primarily in love; may all who hear the Gospel and see it embodied in us find the love of God in Christ, and come to a knowledge of the truth and salvation!

The Tower of Babel And they said, “Come, let us build us a city, and...

Obadiah and Nahum The Assyrians conquered the northern Kingdom of Israel and humiliated the southern...

Rules, People, and Judgmentalism Ever since the beginning of mankind there have been rules. For...