Jesus, the Son of God

And Simon Peter answered and said, “Thou art the Christ, the Son of the living God” (Matthew 16:16).

Why do people throughout the New Testament confess that Jesus is the Son of God?

Jesus of Nazareth lived and died as a first century Palestinian Jew. In order to understand why people would call Him the “Son of God” we must first consider how the term is used in the Hebrew Bible.

In Hebrew, “son of” is a way of describing a relationship. Israelites did not have “last names” as we know them: they were known as “x son of y,” like David son of Jesse. But Eli calls Samuel his son despite having no biological relationship (1 Samuel 3:6). To be 30 years old, in Hebrew, is to be “a son of thirty years.” “Son of”, therefore, can refer to an actual father-son relationship, but also can describe a close association.

The pre-eminent Old Testament passage about being a “Son of God” is Psalm 2:7: I will tell of the decree: YHWH said to me, “You are my Son; today I have begotten you.” In the ancient Near East, kings were frequently understood as having a special relationship with divinity; thus, the king becomes God’s adopted son of sorts.

By the first century this Psalm was understood as referring to the Messiah; therefore, to confess anyone as the “Son of God” meant to confess that person as the Messiah, the King.

All who were confronted with Jesus of Nazareth had to grapple with the question of whether He was the Son of God or not, and therefore whether to confess that He is the Son of God or deny Him. The literal force behind the word “to confess” in Greek, homologeo, is “to speak the same thing as,” thus, to declare one’s belief and confidence in something.

By confessing Jesus is the Son of God, we confess that He is the hope of Israel, the Messiah (Christ) prophesied by Moses, David, and the prophets, the King of Psalm 2:7, reigning in the Kingdom of God, given all authority until the final enemy, death, has been defeated, and all ought to believe in Him and confess His name (Romans 1:4, 1 Corinthians 15:20-28, Philippians 2:8-11)

By confessing Jesus is the Son of God, we declare how God’s unity is not in person but in relationship; there is Jesus, the Son of God, and there is God the Father, allowing us to identify with God in terms of family, as adopted sons of the Father in Christ, as brothers and sisters of Jesus and thus with one another (John 17:20-23, Romans 8:11-15, 1 Timothy 3:15).

By confessing Jesus is the Son of God, we declare Jesus as co-eternal with God, active in creation: all things were created in Him, through Him, and unto Him, and all things continue to exist in Him and through His sustaining power (Colossians 1:15-17, Hebrews 1:3).

By confessing Jesus is the Son of God, we declare that Jesus has been active throughout the history of the universe, not just in creation but also in Israel (1 Corinthians 10:1-12, Jude 1:5).

By confessing Jesus is the Son of God, we declare Jesus as the embodiment of God, expressing all divine characteristics, by whom we can understand the nature of the Father: if we want to be godly, we must be as Jesus, who was and is God (John 1:18, 14:6-13, Colossians 1:15, 2:9, Hebrews 1:3).

To declare Jesus as the Son of God requires us to focus our minds on His divinity and power. So often our view of Jesus is shaped by many of the pictures of Him popular in our culture: a white male with long hair, smooth, perhaps soft, very gentle and mild. Yet compare this view with Jesus as He revealed Himself to John in Revelation 1:12-18: Jesus is described as “one like a son of man,” but in terms of the Ancient of Days in Daniel 7:9-13: fearsome, with hair white as snow, eyes as flaming fire, a voice as of the sound of many waters, and a two-edged sword coming from his mouth. Little wonder that John fell down as though dead (Revelation 1:17)!

Jesus is the Son of God; such is not a denial of His humanity, but we do well to remember it, for it means He is God, the Lord, full of love, grace, and mercy, upholding justice and righteousness. Let us confess Jesus as the Son of God and then live that confession (Matthew 10:32-33)! 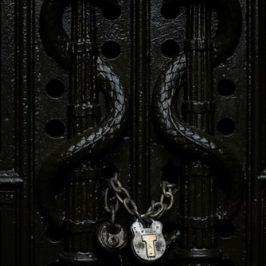 Fear in Culture and Faith As individuals, most people are sensible and rational. In groups,...

The Spirit for the Remnant Joel had warned Judah and Jerusalem about a terrible invasion...

By this love is perfected with us, so that we may have confidence in the day of judgment, because just as Jesus is, so also are we in this world. There is no fear in love, but perfect love drives out fear, because fear has to do with punishment... https://t.co/7k87WdoeCI
View on Twitter
0
1

James warned about the dangers of speech. https://t.co/yvsrE1dQq6
View on Twitter

But Jesus, paying no attention to what was said, told the synagogue leader, “Do not be afraid; just believe" (Mark 5:36). https://t.co/6eXvZZ4In9
View on Twitter
0
1

"Do not be afraid of those who kill the body but cannot kill the soul. Instead, fear the one who is able to destroy both soul and body in hell" (Matthew 10:28). https://t.co/8K2on7vDoF
View on Twitter
0
0

The disciples confess Jesus as the Christ yet do not fully understand. https://t.co/46DW9neKuc
View on Twitter

And set free those who were held in slavery all their lives by their fear of death (Hebrews 2:15). https://t.co/qFme4JOtaz
View on Twitter
0
0
Follow @venicechurch