Jesus, the Son of Man

Of all the various ways Jesus described Himself He used “Son of Man” most frequently. While this may seem a strange way to speak about someone to us today, its meaning was well understood to those Israelites who lived in the first century. What is this meaning, and what is the significance of Jesus as the “Son of Man”?

“Son of Man” is used in three ways in the Old Testament. Its primary meaning is “a human,” as seen in Psalm 8:4: “what is man that you are mindful of him, and the son of man that you care for him?” Hebrew poetry is marked by parallelism, and here David uses that parallelism to say a similar message in two different ways: a “son of man” is a man, or a human. God calls two specific people “son of man” in the Old Testament, both prophets: Ezekiel and Daniel (Ezekiel 2:1, Daniel 8:17).

Jesus had good reasons to style Himself as Daniel’s “one like a son of man.” This description and prophecy explains His timeline: most kings live, rule, and then die, but Jesus lives, dies, is raised again, ascends to heaven, and then rules. This timeline is implicit in Daniel’s vision and nowhere else in the prophecies of the Messiah.

We do well to note that Daniel does not see God the Word or the Son of God receive an everlasting dominion; he sees it given to “one like a son of man.” Such is not to deny Jesus as God the Word or the Son of God, but a reminder to us that Jesus remains fully human as well as fully divine. God cannot die; therefore, God cannot be raised from the dead. Since Jesus’ death and resurrection are the witness and demonstration of why God has given Him all power and authority, Jesus could not obtain that power as only the Son of God, but must remain the Son of Man as well (Matthew 28:18-20, Acts 2:14-36, Romans 1:1-4)!

Therefore, Jesus’ self-identification as Daniel’s Son of Man highlights His humanity and best defines what God does through Him from beginning to end: Jesus was to be presented before the Ancient of Days in order to obtain the eternal kingdom and dominion, but the only way He could gain that Kingdom was through His ministry, suffering, death, resurrection, and ascension (Matthew 20:25-28, Romans 8:1-3, 1 Corinthians 15:20-28, Hebrews 9:11-14). To this day Jesus rules as Lord, the “one like a son of man,” as a Mediator between God and man, since He remains both, and will return in His transformed resurrection body, both fully God and fully man (Hebrews 4:14-15, 5:7-10, 1 Timothy 2:5, 1 John 3:1-3)!

Christians are easily tempted to so emphasize Jesus’ divinity that His humanity is neglected or forgotten. Christians are also tempted to take the Biblical contrast between “the flesh” and “the spirit” too far as well and demonize the physical body and realm.

We must never forget that while Jesus is God, He is God in the flesh. Humanity has been corrupted by sin, yet not so corrupted as to be incapable of obtaining dignity or reconciliation with God, and this is made evident by Jesus, as God, becoming man and living in the likeness of sinful flesh yet without sin (Romans 8:3). Jesus’ present existence in the resurrection is the basis of the Christian’s hope of sharing in that resurrection for eternity (Matthew 26:64, Acts 7:56, 1 Corinthians 15:20-58). In Christ God is not far from us, having experienced temptation, suffering, and death, and therefore able to sympathize with us (Hebrews 4:15, 5:7-8).

John sees Jesus in a vision in Revelation 1:12-18 and is overwhelmed by what he sees. Yet even though John sees Jesus in terms of the Ancient of Days , the Son of God, he still describes Jesus generally as “one like a son of man” (Revelation 1:13). In the New Testament Jesus is only divested of His humanity between His death and resurrection; otherwise throughout He is fully God and fully man. Thus He remains to this day, and thus will He be forevermore. Let us recognize Jesus as the Son of Man and serve Him in His eternal dominion! 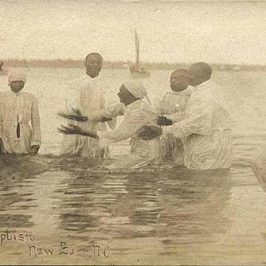