The Gospel According to Mark

The time had come to put stylus to papyrus and record the story of the life, death, and resurrection of Jesus of Nazareth as proclaimed by those who saw Him. John called Mark, having most likely heard the Gospel preached by both Paul and Peter, wrote particularly to people from the nations to make known what Jesus did.

The Gospel according to Mark is the second book in modern editions of the New Testament. The work itself is anonymous and manifestly written in Greek; early Christians bore witness that it was written by John called Mark, the cousin of Barnabas, and based upon the preaching of Simon Peter (Acts 12:12, 25, Colossians 4:10, 2 Timothy 4:11, 1 Peter 5:13; Papias according to Eusebius, Ecclesiastical History 3.39.15-16). The events described in Mark take place ca. 5 BCE to 30/33 CE. Even among scholarly circles it is generally agreed that the Gospel of Mark was written prior to 70 CE; if Mark works with Peter primarily in Rome, then ca. 61-65 is the most likely date (cf. Philemon 1:24, 1 Peter 5:13).

Mark, along with Matthew and Luke, are called the “synoptic” (“seeing all together”) gospels since they share many sayings, stories, and general narrative structure. Over time different suggestions have been made as to who wrote when and who influenced whom; the current idea in vogue suggests that Mark was written first, and that Matthew and Luke are dependent on him. It is not for us to delve into the depths of the synoptic problem, but we do well to note that the vast majority of what we read in Mark can be found in Matthew or Luke or both. Since Mark does not emphasize prophetic fulfillment and feels compelled to explain certain particularities which would have been known to a Jewish audience (e.g. Mark 7:3-4, 7), it is believed that Mark writes to a predominantly Gentile audience.

Mark’s Gospel focuses primarily on action and often groups activities together by form or function. Mark began quickly with John the Baptist, Jesus’ baptism, temptation, calling of disciples, casting out an unclean spirit and cleansing a leper, and going about to the towns preaching the Gospel (Mark 1:1-45). After narrating points of conflict between Jesus and the Pharisees, calling the disciples, and establishing God’s servants as His family (Mark 2:1-3:35), Mark sets forth Jesus’ parables (Mark 4:1-41). Mark then narrates the healing of the Gerasene demoniac, the woman with an issue of blood, and Jairus’ daughter (Mark 5:1-43). Mark continued by narrating the rest of Jesus’ ministry in Galilee: rejection at home, the death of John the Baptist, feeding the five thousand, walking on water, setting the Pharisees straight regarding cleanliness, assisting the humble Syro-phoenician woman, healing the deaf, feeding the four thousand, warning about the Pharisees and Sadducees, confession of His messiahship, warnings about what would happen to Him, the transfiguration, casting out a difficult demon, and instructing the disciples about standing in the Kingdom (Mark 6:1-9:50).

The rest of Mark’s Gospel described Jesus’ journey to Jerusalem and time there (Mark 10:1-16:20). While traveling Jesus disputed with the Pharisees about divorce, received little children, spoke with the rich young man, fielded the request of James and John for authority in the Kingdom, and gave sight to the blind (Mark 10:1-52). Having entered Jerusalem in triumph, Jesus cleansed the temple, rebuked the fig tree, taught the parable of the vineyard, successfully overcame the challenges of the Pharisees and Sadducees, and taught the disciples regarding the end of Jerusalem (Mark 11:1-13:37). Mark then sets forth the events surrounding Jesus’ passion: anointing Jesus for burial, betrayal of Judas, the last supper, inauguration of the Lord’s Supper, prayer in the garden, Jesus’ arrest, trial before the Sanhedrin, trial before Pilate, mockery of the soldiers, crucifixion, derision, Jesus’ death, and Jesus’ burial (Mark 14:1-15:47).

There is much dispute regarding the end of the Gospel of Mark even in antiquity. All agree that Mark wrote Mark 16:1-8, speaking of the women who found the empty tomb, the young man in white telling them to proclaim the resurrection to Peter and the other disciples, and the fear of the women. Most manuscripts continue with the “longer ending” of Mark 16:9-20, detailing Jesus’ appearances to the women and the Apostles, the creation commission, signs and wonders to be done by believers, the ascension, and the proclamation of the Gospel to the world. Some manuscripts maintained the “shorter ending”:

And they reported all the instructions briefly to Peter’s companions. Afterwards Jesus himself, through them, sent forth from east to west the sacred and imperishable proclamation of eternal salvation. Amen.

While some suggest that Mark intended to end his Gospel at Mark 16:8, it is most likely that the Gospel continued to speak of Jesus’ resurrection appearances. Evidence for the “longer ending” of Mark is ancient (Irenaeus, Against Heresies 3.10.6), but not completely uniform. We do well to recognize the textual difficulty with the ending even if we recognize that it substantively provides the ending to the Gospel of Mark.

Mark’s Gospel has many hallmarks which would suggest an origin with Peter: an emphasis on action and works, humility, and suffering. It has been easy to neglect the Gospel in Mark in favor of Matthew or Luke, but such would be a mistake; much can be gained from unique elements of Mark. We do well to learn more of Jesus from Mark’s Gospel and seek to serve Him throughout our lives! 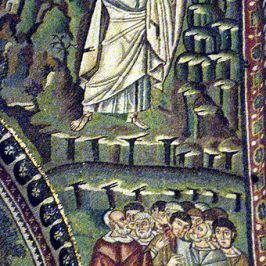