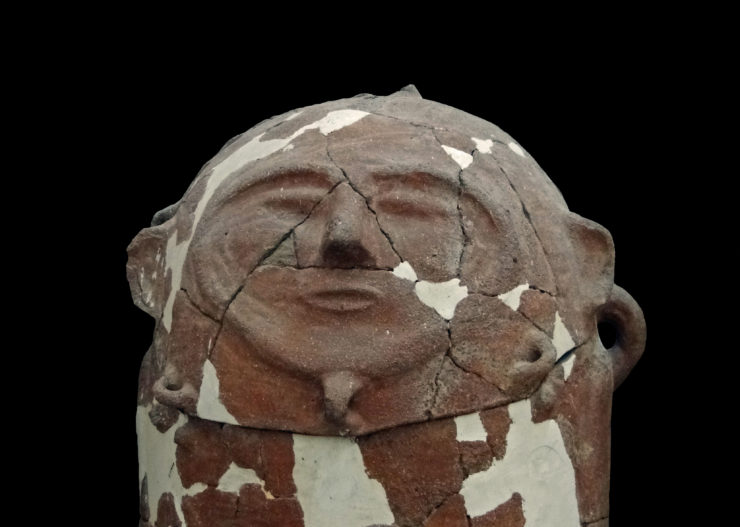 They were brothers and brother kingdoms, born in disgrace. They would endure in hostile environments for many years. They would go as it had been prophesied; yet one brother persevered in his own way, and his legacy endures to this day.

Moab and Ammon represented small kingdoms in the Transjordan region of the Levant. Their fortunes waxed and waned; in general, the Kingdom of Moab was centered on the eastern side of the Dead Sea, bordered by Edom on its south, the Amorites and then the Transjordan parts of Israel and Ammon on its north, and some Aramaean and Nabataean tribes on its east. Its capital was Dibon and the Hebrew Bible testifies to the existence of many cities of Moab; Moab was particularly mountainous and its plains were a plateau rising high above the Jordan River. The Kingdom of Ammon (literally “sons of Ammon” throughout the Hebrew Bible) lay to the north and east of Moab, bordered by the Amorites and then the Transjordan parts of Israel on its west and southwest, the Kingdom of Aram on its north, and Aramean tribes on its east. Its capital was Rabbah, which is modern day Amman, Jordan, capital of Jordan and named based upon its Ammonite heritage; its land was part of the same type of plateau as found in Moab. The regions east of Moab and Ammon were particularly inhospitable; nevertheless, the plains of Moab and Ammon provided sufficient sustenance for flocks, herds, and humans, and the presence of the King’s Highway through their lands provided sources of revenue, access to trade, but also the interest of larger empires.

According to the Hebrew Bible, Moab and Ammon were the sons of Lot through their half-sister mothers in the wake of the destruction of Sodom and Gomorrah; “Moab” means “from the father” and “Ben Ammi” means “son of my people” (ca. 2000 BCE; Genesis 19:30-38). Such a scandalous origin story explained why they were tolerated in their lands yet held in contempt: Moab and Ammon are Abraham’s great-nephews, but remain the product of incest. The Moabites and Ammonites would dispossess the Rephaites (called Emites by Moabites and Zamzummites by Ammonites) akin to the Anakites and known as giants, in order to dwell in the lands of the Transjordan between Damascus and Seir at some point before the Israelites approached their lands (ca. 2000-1450; Deuteronomy 2:9-22). The land which would eventually become the Israelite holdings in the Transjordan seems to have been Ammonite and Moabite before it was overrun by the Amorites and ultimately conquered by the Israelites (cf. Judges 11:12-27). Archaeological and other historical documentation attest to the presence of both Moabites and Ammonites in their respective lands in the Late Bronze Age (ca. 1300-1100).

The Moabites and Ammonites did not take kindly to the specter of the presence of the Israelites; on account of their lack of hospitality, YHWH decreed Ammonites and Moabites could not enter into His assembly, and Israel was not to provide them with material aid (Deuteronomy 23:2-6). Balak, king of Moab, infamously hired Balaam to curse Israel as they dwelt on the plains of Moab; Balaam ended up blessing Israel, yet undermined Israel with the advice for the Moabites to seduce the Israelites into serving other gods (Numbers 22:1-25:3). After the Conquest, Eglon king of Moab, in alliance with the Ammonites and Amalekites, dominated over and oppressed Israel until he met his end at the hands of Ehud (ca. 1375?; Judges 3:12-30). In the twelfth century the Ammonites would grow strong and oppress the Transjordan portions of Israel and beyond, claiming sovereignty over the Transjordan; they were defeated by Jephthah (ca. 1175; Judges 10:7-11:33), yet remained a source of consternation for Israel, since Nahash king of Ammon oppressed Gad and Asher and had laid siege to Jabesh-Gilead which was fortunately relieved by the rise of Saul and his army (ca. 1050; 1 Samuel 1:1-11, and 4QSama, which preserved the following, also attested by Josephus in the Antiquities of the Jews 6.68-71: “Now Nahash, king of the Ammonites, had been grievously oppressing the Gadites and the Reubenites. He would gouge out the right eye of each of them and would not grant Israel a deliverer. No one was left of the Israelites across the Jordan whose right eye Nahash, king of the Ammonites, had not gouged out. But there were seven thousand men who had escaped from the Ammonites and had entered Jabesh-gilead”).

Both Moab and Ammon would be defeated by and made subject to David and were incorporated into the Israelite Empire (ca. 975; 2 Samuel 8:11-12, 10:1-11:1, 12:26-31). Nevertheless, Moab and Ammon would feature prominently in Israel at this time: Ruth the Moabitess became part of the family of Elimelech of Judah, and became the great-grandmother of David, and Naamah the Ammonitess was the wife of Solomon and mother of, and likely significant influencer upon, Rehoboam king of Judah (Ruth 1:1-4:22, 1 Kings 14:21).

Moab and Ammon would remain subject to the Israelite kings until after the days of Ahab. Although not attested in Scripture, it is recorded how the Ammonites were allied with Ben-Hadad of Aram and Ahab of Israel against Shalmaneser (III) of Assyria at the Battle of Qarqar in 854. Mesha king of Moab rebelled against Israel after Ahab died; the battle between Mesha and the alliance of Jehoram, Jehoshaphat, and the king of Edom is set forth both in 2 Kings 3:1-27 and the Moabite Stone or Mesha Stele, and it would seem Moab suffered greatly, Mesha sacrificed his own son to Chemosh his god, but was able to secure his independence (ca. 850). At some point around this time the Moabites and Ammonites allied with one another and the Meunites and planned to attack Judah under Jehoshaphat; they apparently feuded with one another and destroyed one another (2 Chronicles 20:1-30). Moab and Ammon would no longer be subject to Israelite or Judahite kings; whether they maintained full independence or came under the subjection of the Arameans is not explicitly revealed, but the latter remains highly likely.

The prophets testified against Moab and Ammon and spoke of their doom (Isaiah 15:1-16:14, Jeremiah 48:1-49:6, Isaiah 25:10, Ezekiel 21:28-32, 25:8-11, Amos 1:13-2:3, Zephaniah 2:8-11). The Kingdoms of Moab and Ammon attempted to negotiate the convulsions of the Neo-Assyrian, Neo-Babylonian, and Persian Empires, but with mixed results. Shalman king of Moab (cf. Hosea 10:14) submitted to Tiglath-pileser III of Assyria. Sargon (II) listed Moab among the nations which rebelled against him, but then Chemosh-nadab would submit to him and bring tribute, as would Mutzuri and Kaashalta after him. Yet by 400 BCE no more mention is made of the Kingdom of Moab, for its territory was overrun first by Kedarite Arabs and then the Nabataeans, just as Ezekiel had prophesied.

The Ammonites enjoyed better fortunes than the Moabites. The Ammonites did join the revolt against Sennacherib king of Assyria, but otherwise remained loyal vassals to Assyria, Babylon, and Persia. The Ammonites would feature prominently in the destruction of Jerusalem and its immediate after effects; bands of Ammonites (and Moabites) raided Judah between 609 and 599 (2 Kings 24:2), Baalis king of Ammon conspired against Gedaliah the caretaker of Judah on behalf of the Babylonians, had him killed, and gave refuge to the conspirators who survived (Jeremiah 40:12-41:15); as a result a good number of the remaining Judahites fled to Egypt (Jeremiah 41:16-18). By this time the Ammonites had most likely re-incorporated the Transjordan lands of Israel into its territory. One of Nehemiah’s implacable enemies who had profited handsomely at the expense of Judah was Tobiah the Ammonite who had married into the family of the high priesthood and even maintained a storeroom in the Temple in Jerusalem (ca. 445; Nehemiah 4:1-11, 13:1-9). Ezra and Nehemiah lamented how many of the people had taken wives from among the Ammonites, Moabites, and others (cf. Ezra 9:1-10:44, Nehemiah 13:23-29). The Ammonites would persist into the Hellenistic period and would assist the Seleucids against the Maccabees and Hasmoneans. Much of the Ammonite territory would become the area of the Decapolis in the days of Jesus, the Apostles, and the Roman Empire; Rabbah would become known as Philadelphia, and the Ammonite and Aramean residents would generally assimilate into the Greco-Roman milieu.

The Moabites and Ammonites culturally and religiously lived as Canaanite people. They would have served the Canaanite pantheon; Mesha recognized Chemosh as the specific god of Moab, and he may also be highly regarded by the Ammonites as well (Judges 11:24, 2 Kings 3:1-27). Otherwise Milcom is attested as the specific god of Ammon (1 Kings 11:5-7, 2 Kings 23:13, Jeremiah 49:1-3). The Moabite of the Mesha Stele/Moabite Stone demonstrates it as a Canaanite dialect closely related to Hebrew; the few shards of Ammonite texts suggests the same for Ammonite, although the latter may have some more influence from Aramaic. Mesha’s sacrifice of his son might seem barbaric to us but is a practice attested in Levantine religion; witness the passing of one’s child through the fire to Molech (cf. Jeremiah 32:35), possibly related to Milcom of the Ammonites, and the archaeological discoveries of many child bones in the temple to Melqart at Carthage in Tunisia, a colony of the Phoenicians.

Neither the Moabites nor the Ammonites were ever exiled from their lands; many of the inhabitants of the modern nation of Jordan likely prove direct descendants of the Moabites and Ammonites. Many of them would have heard the Gospel of Jesus in the first few centuries CE and may have come to faith in Jesus. God proved faithful to His declarations regarding Moab and Ammon. May we trust in God in Christ and obtain life in Him!