The Nature of the Church: The Church as Ekklesia

“And I also say unto thee, that thou art Peter, and upon this rock I will build my church; and the gates of Hades shall not prevail against it” (Matthew 16:18).

By this statement Jesus establishes the term most commonly used to describe the group of people who follow Jesus: “the church”. We today may not think much of it, but it is interesting to note that Jesus chose a particular term in the midst of so many to refer to this group. In Greek, the term is ekklesia; why does Jesus use this particular word? What do we know about it?

Very often, ekklesia is defined by its origin: ek, meaning “from,” and kaleo, meaning “to call”, and therefore we see “the called out”. While the word derives in this way, such is not its meaning. By the time of the New Testament, the word had a long history, and there is no dispute that the word was understood to mean “assembly”. Why, then, does Jesus describe the group of His followers as “the assembly”?

In the Greco-Roman world of the New Testament ekklesia would have been commonly understood as possibly referring to a disorganized crowd (cf. Acts 19:32, 40), but most likely to a political legislative body, somewhat akin to our current Congress (cf. Acts 19:39). The term was rarely, if ever, used to describe a religious body in the pagan world. Nevertheless, we can discover some interesting parallels between the ancient legislative bodies and the nature of the church established by Christ. Granted, we cannot extend these too far, since the bodies have different purposes, but they perhaps might shed some light on why the term ekklesia was used to describe the church.

The ancient ekklesiai consisted of “equal” persons. The ancient Athenian assembly consisted of all freeborn native men, and each had an equal opportunity to speak and to vote. Granted, this is not full equality, since there is no mention of women or non-natives, but for the ancient world this was a huge step toward equality. In the assembly of Christ, every soul is equal before God (Galatians 3:28), an equally revolutionary concept. We recognize that the Scriptures define different roles for different people (cf. Ephesians 5:22-6:9), but the inherent equality of each person before God is assured.

The ancient ekklesiai involved participation by everyone. In ancient Athens, all men who were able to comprise the assembly realized that they should attend and help make the important decisions. In fact, those who did not perform their civic duty were considered worthless. Likewise, in the assembly of Christ, all saints should realize the need to assemble with one another (cf. Hebrews 10:25), and while God has again established different roles for different people within the assembly (cf. 1 Timothy 2:11-15, 1 Corinthians 14:34-35), everyone can participate in the prayer, singing, Lord’s Supper, and other such acts.

The ancient ekklesiai continued for generation after generation, with the younger learning from the older and in turn teaching the next generation. The assembly of Athens was the main legislative body for over 150 years and lasted for many more; it continued because each generation, in turn, involved the younger generation, instilled in them the need to continue the assembly, and showed them how to participate. The assembly of Christ has functioned in much the same way: Christ has always remained the Head (Ephesians 5:23), but it is incumbent upon each generation to instill in the younger generations the need to assemble with the saints and to fight the good fight of faith (cf. Ephesians 6:10-18), to instruct them in the discipline and admonition of the Lord (Ephesians 6:4), and to provide them an example to follow.

We do well to remember that while early Christians lived in a world dominated by Greco-Roman culture, Jesus and the Apostles were Jewish. The translators of the Septuagint, the Greek translation of the Old Testament, were aware of the way ekklesia was used in Greek and thus used the term to translate the Hebrew qahal, “assembly, congregation,” over 60 times. They used the term frequently when describing the assemblage of the congregation of Israel: times when Israelite people were physically gathered together for some purpose (e.g. 1 Kings 8:14). The ekklesia of Israel thus in a real way denoted the gathered people of Israel. Thus, when Jesus speaks to His fellow Jewish people about His ekklesia, they would first understand it in terms of how the ekklesia functioned in the Old Testament, as the gathered nation of Israel. In this way Jesus displays the continuity of God’s purposes: as physical Israel comprised the people of God so now the people of God surround the Lord Jesus who fulfills the hopes and expectations of Israel (Matthew 5:17-18, 1 Peter 2:9). As physical Israel demarcated itself by circumcision and Abraham’s genetic heritage, so the spiritual Israel is demarcated by those who share in Abraham’s faith and thus the fulfilled promises of Abraham in Jesus Christ (Romans 4:1-23, Galatians 3:1-5:4). We can therefore see from the Jewish use of ekklesia that the church is envisioned as the people of God in Christ, for whom and through whom God works to accomplish His purposes, placing some emphasis on the actual gathering or assembling of those people, both in terms of local assemblies and looking forward to the great assembly of all the saved on the final day (1 Corinthians 11:18, Revelation 21:1-22:6).

Of all the terms Jesus could have chosen to describe His people, He chose ekklesia, a term with robust history and meaning for both Jews and Greeks. An ekklesia is people, not a building or an institution; an ekklesia is comprised of people who come together frequently for a shared purpose. Let us therefore work together as God’s people in Christ, His ekklesia, seeking to encourage and build up one another as we gather together for God’s glory and honor! 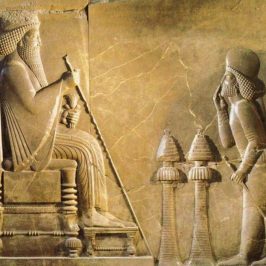