The Perils of Cultural Accommodation

Christians living in twenty-first century Western culture live in dynamic and interesting times. In a very short time many cultural values have been transformed; behavior previously considered unacceptable is now justified, and condemnation of that behavior is now excoriated. In such an environment Christians find themselves under considerable cultural pressure to change their convictions, ideologies, values, and views accordingly. The secular forces have come to expect these changes; time and time again, on matters of race, gender, sexuality, technology, etc., as culture has changed, so many in Christendom have changed a few years later. If Christians were forced to enter modernity and to be on the “right side of history” about slavery, race relations, gender equality, and technology, so now Christians are expected to change their views about homosexual behavior, the nature of gender, the origins of the universe and mankind, and the way we should look at the world. What shall we say to these things?

Unfortunately history is littered with examples of “Christians” behaving badly. In the past many professed Jesus and believed they were justified to go out and kill other people in the name of Jesus and to spread the Gospel with the sword; many owned slaves, and treated them brutally; many professed Jesus and believed in the superiority of the “white race” over other races and of men over women. Some professed Jesus and doggedly held onto antiquated ideas about the relationship of the Earth to the Sun and other planets. Many of these Christians not only believed and did such things but attempted to justify them through the abuse and distortion of what God revealed through Jesus in Scripture. Such views, feelings, and behaviors were sinful and wrong; Christians today lament and mourn over them.

Nevertheless we do well to consider what made such views, feelings, and behaviors wrong, and what motivated those people to adapt them. Did Christians get the idea that they should go kill other people in the name of Jesus or attempt to convert them to the Gospel by the sword from Jesus in the New Testament? Did Christians get the idea that slaves should be brutalized and black people and women should be denigrated from Jesus in the New Testament? By no means! Jesus never intended for His Gospel to be advanced through the coercive force of nation-states, nor did He intend for anyone to be killed in His name (Matthew 5:38-48, Romans 1:16). The New Testament does not condemn slavery, but it does condemn brutal treatment of slaves (Ephesians 6:9, Colossians 4:1). Paul affirms the equal value in Christ of men and women as well as master and slave in Galatians 3:28 and Colossians 3:11; those who suggested otherwise were not getting their ideas from God in Christ.

So where did these ideas come from if not from Scripture? In all of these situations those who professed Jesus were actually following the ideas and views of the cultures in which they lived! Rulers of nation-states, starting with Constantine, attempted to justify their rule and behavior as advancing the Gospel of Christ. Western Europeans developed race theory to justify their accession to power and enslavement and/or colonization of other people; it also served to rationalize their inhumane treatment of slaves or subjects for economic profit. Cultural denigration of women was a theme throughout many cultures deep into antiquity. The cosmological views of medieval Christendom derived from Ptolemy and other Greco-Roman astronomers. Those who professed Jesus in these environments felt the pressure to compromise their understanding of the Gospel to accommodate these sinful and ungodly values and views and too often succumbed; they then attempted to “baptize” them with any kind of Biblical veneer they could find. They twisted Scripture to their own destruction (2 Peter 3:16)!

Those who professed Jesus in earlier generations did not err in their faithfulness to God in Christ; they erred and sinned grievously because they accommodated what is revealed in the New Testament to what was acceptable in their culture and time! Christians in twenty-first century America must be attuned to the same peril and continue to resist it. The Gospel is not to be advanced through compulsion or force, but it must be advanced and taught; we cannot be silent (Romans 1:16). All lives, black and white, male and female, born and yet to be born, are equal in God’s sight and thus should matter (Galatians 3:28, Colossians 3:11). The same Paul who powerfully affirmed the equality of men and women in the sight of God also exhorted each to fulfill the roles God has given them (Galatians 3:28, Ephesians 5:22-33, Colossians 3:11, 18-21); according to the New Testament it is no better to justify violations of the divine hierarchy and commend women preaching and teaching over men than it is to justify treatment of women as second-class citizens of God’s Kingdom (1 Corinthians 11:3, 1 Timothy 2:9-12). Culturally acceptable forms of sexual relationships and behaviors may change, but we must hold firm to God’s decree of one man and one woman for life in marriage with all other forms of sexual behavior declared immoral (Matthew 19:3-6, 9, 1 Corinthians 6:9-20, Hebrews 13:4). Rejecting God’s revelation regarding the creation of the universe and mankind for the presently popular Darwinist alternative is no more wise than it was for earlier generations to hold firm to the Ptolemaic way of seeing the universe (Genesis 1:1-3:24).

The secularizing forces of “modernization” and “progressivism” want Christians to come out of what they perceive to be the “dark ages” and to accommodate their views; such accommodation is in fact the very problem that has bedeviled Christianity for two thousand years! Cultures throughout time have justified all sorts of immoral and ungodly behaviors; the remedy is not to trust in our culture as superior but to contend for the faith delivered once for all in Jesus Christ (Jude 1:3). May we root ourselves in God in Christ and not in the shifting views of the world (Romans 12:1, Colossians 2:1-10)! 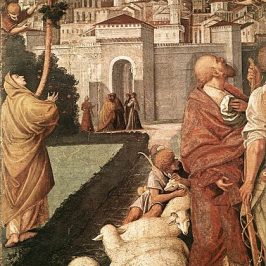