When we think about hypocrisy, we often immediately start thinking about people who say one thing and do another. We might think about the Pharisees and Jesus’ condemnation of them in Matthew 23:1-35: they might say, but they do not do as they say. We might also think about the many people of whom we hear who vigorously denounce some practice while they themselves do it or something similar. Recently there seems to be no lack of “Christians” who publicly denounce homosexuality but are found in embarrassing scandals involving their own homosexual behavior. The truth is then blasphemed because of such things (cf. 2 Peter 2:2)!

We understand that such hypocrisy is sinful and it should be avoided. We are all a bit uncomfortable since we know that we all are at least somewhat hypocritical in this way: none of us are perfect, even if we promote and advance the perfect way of Christ (Romans 3:23, 1 John 2:3-6). Such is the force behind the condemnation of judgment in Matthew 7:1-5 and Luke 6:37-42: since we all have our faults, we must first consider ourselves and work on ourselves before we can encourage others. When we are honest with our own difficulties, others tend to be more willing to give us credence!

While we are familiar with this form of hypocrisy there remains another form that is more insidious and, far too often, “sanctified” by believers.

Our word “hypocrite” is a transliteration of the Greek hupokrites. The word originally referred to an actor: a person who plays the part of another. Actors are people who are playing a role that does not really reflect their true identity or feelings. While actors in our society often receive fame and wealth, some of the greatest “theaters” of our day are in church buildings around the country, and we are not speaking about the recent “entertainment” trends in churches. Far too often, Christians who know that they should not be “hypocrites”–saying one thing and doing another–still play the “hypocrite.” They are putting on an act: a false face!

It is easy to understand why this happens. We know that God is holy, and we are supposed to be holy like Him (1 Peter 1:16). As Christians, we are supposed to be standing firm against sin, and proclaiming holiness and righteousness in our words and deeds (Matthew 5:13-16, Ephesians 6:10-18). No one really wants to be known as the struggling Christian, the weak Christian, or any such thing. We want to be mature and strong and well-regarded among the brethren!

We often take our cues from one another. Perhaps there are a few among us who really have everything together; well and good for them! But for the majority of us, we have challenges and difficulties. We want to do what is right, but we often struggle with sin (Romans 7:15-25). We are weaker than we project. It would probably be good for us to “go forward” and receive encouragement from brethren, but then what would others think of us? When we look around, everyone else seems to be doing just fine. They are probably acting like we are, but how are we to know?

Unfortunately, sometimes this tendency is made worse by some Christians and churches. If and when someone confesses sin and repents of it, in a foolish and misguided attempt to keep others from sinning, they get punished. Too often such actions prove counterproductive: people still struggle with sin, but they absolutely will not talk about it for fear of punishment! The acting continues.

Thus we have the “sanctified” hypocrisy: we all put on the happy face, pretend that we have everything put together, and project spiritual strength to each other. Meanwhile, how many are losing the battles against sin and are drained of the encouragement they should be receiving from brethren in that fight?

Jesus does not call His body to sanctified hypocrisy. Instead, He calls His people to be accountable not just to Him but also to one another (Galatians 6:1-2, James 5:16). Christians are to understand that they are strong precisely when they are weak: then they are willing to draw strength from God and brethren as opposed to relying on their strength alone (2 Corinthians 12:9-10). If a brother or sister falls into sin, confesses it and repents of it, we are not to penalize them but encourage and strengthen them (2 Corinthians 2:5-8)! We should be facilitating an environment where people feel welcomed and included enough to be willing to open up and freely confess their faults and difficulties, because only then will there be true growth and healing (1 Corinthians 12:24-26).

We are called to holiness, and some subjects should be handled with sensitivity. Nevertheless, there is no room in the Body for sanctified hypocrisy. Let us stop playing an act and start attempting to lead open and authentic lives as disciples of Christ! 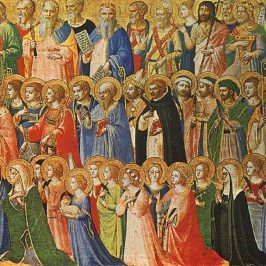