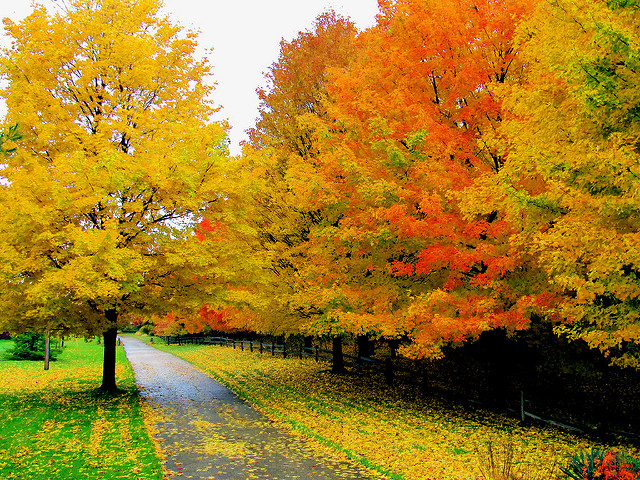 “While the earth continues to exist, planting time and harvest, cold and heat, summer and winter, and day and night will not cease” (Genesis 8:22).

The tempest had been great; the promise given, even greater.

God saw the great sinfulness man maintained on the earth; He determined the only remedy was severe: a flood which would consume all flesh (Genesis 6:5-7). The waters of the earth and above the heavens fell upon the land, covering all of it, and drowning all save Noah, his family, and the animals on the Ark (Genesis 7:1-24). After the waters receded, God promised Noah and his descendants that He would never again flood the entire world (Genesis 8:20-21); as part of that promise, God declared that as long as the earth would endure, there would be seasons and day and night (Genesis 8:22).

We can bear witness to God’s faithfulness to this promise: while there have been great and terrifying floods in many parts of the world which have led to the deaths of untold millions of people, the entire world has not flooded since the days of Noah. To this day we still have spring, summer, autumn, and winter; we still experience day and night. We have every reason to expect that the Earth will continue to rotate around the Sun, and to experience the concomitant days, nights, and seasons, until the Lord Jesus returns.

God has thus promised that there would be days and nights and various seasons, but that does not mean God promised they would come without any kind of variation or changing. God promised that day and night would not cease, yet God also heard Joshua’s prayer, and the sun stood still for a full day while Israel defeated their enemies (Joshua 10:12-14), and God also brought darkness upon the land while Jesus suffered on the cross (Matthew 27:45). The historical record well preserves 1816 as the “Year Without a Summer”: the 1815 eruption of Mount Tambora in modern-day Indonesia produced a “volcanic winter,” leading to abnormally cold temperatures throughout North America and western Europe in 1816. The land experienced frosts throughout the year but also wild temperature swings; crops failed and famine prevailed in the land.

These events are certainly exceptional and extreme, but they help us better understand God’s promise in Genesis 8:22: God promised that the earth will maintain its rotation on its axis so that there will be days and nights and seasons. God did not promise that there would never be any kind of temperature variation in those seasons, or that “seasonal” weather would never become extreme.

While God promised there would be days, nights, and seasons, God has also made known that the creation has been subjected to futility and decay (cf. Romans 8:18-23). God has given rain and fruitful seasons to mankind in His blessings (Acts 14:17); He has also judged mankind with famine, plague, flood, pestilence, and other forms of devastation (Ezekiel 5:11-13, Amos 4:5-13). When a people revel in sin, the land mourns: our very environment is affected by our iniquity (Hosea 4:1-3). God did indeed promise there would be day and night and seasons; God also promised that as people sow, they shall reap, and if they sow the wind, they might well reap the whirlwind (Proverbs 22:8, Hosea 8:7).

For generations humans have noticed variations in weather and temperature patterns; some periods of time are warmer or colder, wetter or drier, than others. Thanks to research derived from observations of how the Earth rotates around the Sun, historical records and records encased in tree rings and ice and mud cores, and other data, we have begun to better understand why those variations can take place. The Earth “wobbles” a bit in its orbit around the Sun, sometimes getting a little closer, and other times getting a little farther out; many of those “farther out” periods would have led to what we call ice ages. Significant volcanic activity can lead to the kind of “volcanic winter” experienced in 1816; if a few of these events take place in a short amount of time, we can find evidence of cooling in the climate that would last for decades. When we consider the climatic history of the past 2200 years, we find regional variations like the “Roman Warm Period” of 250 BCE to 250 CE, the “Medieval Warm Period” of 950 to 1250 CE, and the “Little Ice Age” of 1500-1800 CE. When we consider the historical record of those times, we can see how the “warm” periods led to better agricultural yields and higher populations, and we now recognize that many of the contributing factors which led to the collapse of those periods were rooted in the changing of the climate to the “colder” periods. The evidence on the ground, therefore, strongly associates times of prosperity and times of distress with cyclical climate changes.

Few of these changes were dramatic; most took place over a few generations. Yet they were very much felt. The “warm” periods were comparable to the temperature and seasons of the middle of the twentieth century; the “cold” periods saw longer winters and shorter summer periods, more frequent famine, and often bubonic plague. And yet the variation in global overall temperature was less than a degree Celsius.

By the 1800s the Earth was already experiencing a time of warming; in the past century we have seen anomalous increases in carbon dioxide in the atmosphere, and have already experienced over a degree Celsius of global overall temperature increase, well beyond anything experienced by natural cyclical variations over the past 2200 years.

What makes the modern moment different? Humans have industrialized, and our machines emit carbon dioxide and methane into the atmosphere. Our activities seem to have accelerated an existing warming trend even though the orbit of Earth might be trending into what would normally become a time of cooling.

Many have wished to dismiss any such claims as fantastic in light of God’s promise in Genesis 8:22. We will always have seasons, so it is said; thus the idea of “global warming” seems patently ludicrous. If all that was suggested was that Earth would always be in summer, and if Genesis 8:22 were the only word on the matter, such a view would be understandable.

Yet those who recognize the changes in our climate have never suggested that seasons would end. Instead, it is suggested that seasons become more extreme: the cold can get colder; the hot even hotter; dry spells last longer, but storms also get stronger. We are beginning to see these suggestions come to pass. What used to pass for extreme events are becoming far more commonplace; what we used to think was “normal” is no longer proving so.

In Genesis 8:22, God does not promise a particular experience of spring, summer, autumn, or winter; just that there would continue to be spring, summer, autumn, and winter. The seasons remain. But when we “sow the wind” with fossil fuel emissions, we might well find ourselves “reaping the whirlwind” of a planet with extreme weather that has become much less hospitable than it was before our innovations and developments.

God has never promised any of us a comfortable existence in a highly sophisticated and technologically advanced civilization. The historical records of the kinds of famines, pestilences, plagues, and wars which have beset mankind since the Lord Jesus ascended to heaven would speak otherwise! Yes, there will continue to be days and nights, springs, summers, autumns, and winters. But that is no guarantee that the climate and weather our children or their descendants will experience will be as comfortable and pleasant as our own. That God promised the continuation of seasons is no good argument against the prospect of climate change, and the people of God should cease considering it so.