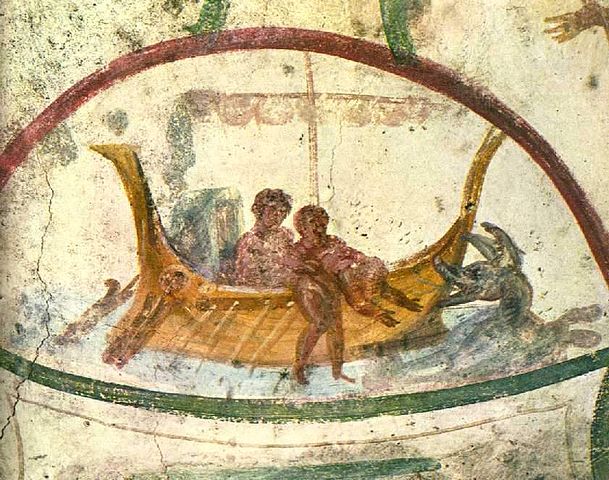 The Word of YHWH came to Jonah ben Amittai: go to Nineveh and cry against it; their wickedness had ascended before Him (Jonah 1:1-2).

Among the “minor prophets” Jonah is unique: most of the book is a narrative in the life and work of Jonah; it is not primarily a collection of the prophet’s sayings. We do not know when the story was composed; we only know the relative timeframe of the events thanks to a reference to Jonah ben Amittai in 2 Kings 14:25. In it we discover that Jonah ben Amittai is a prophet of Gath-hepher, on the border of Zebulun (cf. Joshua 19:13); he prophesied of how Jeroboam ben Jehoash would restore the borders of Israel. Thus Jonah lived and prophesied around 780 to 750 BCE: a time of renewal and prosperity in Israel, in which many cherished the hope that Israel had been made great again. Not entirely coincidently, the same period was one of upheaval in Assyria: Adad-nirari III had energetically expanded the power and influence of Assyria, but after his death in 783 BCE his successors fell prey to internal strife and discord, a situation which would remain until 745 BCE.

Jonah, Israel, and the whole ancient Near Eastern world were acquainted with the wickedness of Nineveh and the Assyrians. They already had begun manifesting the imperial ambitions which would soon overtake and overwhelm most of the petty ancient Near Eastern kingdoms. Their pagan idolatry was always before YHWH. Perhaps they had done some other great evil of which we are ignorant but Jonah could well imagine.

And yet, when called to go and preach repentance to Nineveh, Jonah fled. Jonah sought to travel as far away from Nineveh as he possibly could; in the world of the ancient Mediterranean, nowhere was farther away than Tarshish. We believe Tarshish to most likely be the same as the Greek Tartessos, a term used to describe the area around the mouth of the Guadalquivir River in modern day Spain, just past Gibraltar, the “Pillars of Hercules,” and thus on the coast of the Atlantic Ocean (Jonah 1:3). By boarding a boat heading for Tarshish, Jonah clearly was not at all interested in heeding the Word of YHWH.

Yet YHWH would not be so easily escaped. While he sailed west he encountered a storm so mighty it threatened to tear the ship apart (Jonah 1:4). The sailors were terribly frightened: each prayed to his own god and sought to lighten the load of the ship. Meanwhile, Jonah slept below deck (Jonah 1:5)! Jonah was awakened and exhorted to pray to his God (Jonah 1:6). They all then cast lots to determine why this evil had come upon them, and the lot fell upon Jonah; he explained who he was and the God of Israel whom he served, and they were all the more scared, for he had already explained what he was doing (Jonah 1:7-10). They wanted to know what they should do, and Jonah told them to cast him overboard, for it was the only way to save themselves from the storm (Jonah 1:11-12). The sailors worked valiantly to get back to land but could not do so; they then begged YHWH to forgive them for what they were about to do to Jonah, and then they cast him overboard (Jonah 1:13-15). The sea ceased raging; the sailors feared YHWH, offering sacrifice and making vows to Him (Jonah 1:15-16). Meanwhile a great fish swallowed Jonah up; he remained in the belly of that fish three days and nights (Jonah 1:17). Much speculation has attended to this large fish: many have presumed it a whale, which is a mammal and not a fish, but might have been reckoned among the fishes in Israelite taxonomy. Perhaps it was a type of sea creature which has since gone extinct. We cannot know for certain.

Jonah prayed to YHWH while in the belly of the fish; its substance is recorded in Jonah 2:1-9. Jonah cried out to YHWH in his affliction, and YHWH heard him (Jonah 2:1-2). YHWH had cast him into the depth of the seas; nevertheless, Jonah remained confident he would see YHWH’s temple again (Jonah 2:3-4). Jonah considered how he had descended into the depths of the waters and yet YHWH had brought back his life from the pit (Jonah 2:5-6). Jonah’s soul fainted within him, and yet he remembered YHWH; his prayer came into the temple of YHWH (Jonah 2:7). Many served idols in futility and thus forsake God’s mercy; Jonah would pay his vows and offer sacrifice to YHWH with thanksgiving, for salvation is of YHWH (Jonah 2:8-9). After three days and nights YHWH spoke to the fish, which vomited Jonah out onto dry land, ostensibly back in Israel from which Jonah had fled (Jonah 2:10).

Jonah’s story so far has certainly been dramatic. We do well to wonder what motivated him to flee from the presence and call of YHWH; in his good time our narrator will reveal it all to us. Yet we can already tell that Jonah clearly wanted nothing to do with whatever YHWH was planning for Nineveh and the Assyrians, and wanted to get as far away as possible. Thus he would go to Tarshish.

We might think it a bit overdone and overdramatic for Jonah to go and flee to Tarshish; we might chastise him for thinking so narrowly or presumptuously, as if he could somehow truly flee from the presence of YHWH and escape Him. At the time many believed their gods to have power in certain geographic areas; Jonah’s behavior might not have seemed as strange to his fellow people of the ancient Near East as it does to us.

We may not be tempted to rise up and go to the other end of the earth in order to escape God’s message and calling, but we should be careful about how sharply we judge Jonah. Jonah was quite forthright and honest about fleeing from the presence and call of YHWH; how many times have we been tempted to shy away from the presence and call of God in Christ, yet attempt to justify or excuse ourselves in doing so? Perhaps Jesus would demand that we reconcile with people who have wronged us or with whom we maintain significant disagreement; perhaps Jesus would have us provide for people who would actively seek our harm; maybe Jesus would want us to speak up in a way that would expose us to rejection, derision, or harm. In all of these moments, and many others, we might want to get on a boat ourselves and flee to Tarshish.

As it was with Jonah, so it is with us: we can try to go as far as we want in trying to flee from God’s presence and word, whether geographically or relationally, and yet we can never truly escape Him. God will find us where we are; we will be held accountable for what we think, say, feel, and do. We are called to draw near to God, not flee from Him in bewilderment, frustration, or shame (James 4:8). On our own we flail about, drowning in the sea of anxiety, despair, fear, and sin; God has delivered us from the storm, for Jesus His Son endured three days and nights in the grave so we can be reconciled to Him and obtain eternal life (cf. Matthew 12:39-41). May we draw near to God and obtain such life in Christ!

The Isolating Internet The Internet has become the greatest telecommunications tool on the planet and...

Job humbled himself and was healed. https://t.co/beJ6iukTgo
View on Twitter

Venice (CA) church of Christ ·
@venicechurch
What would sustain Israel through the dark days to come?

What was the last message which God left ringing in the ears of Israel? Of us in Christ?

Venice (CA) church of Christ ·
@venicechurch
Many have a hard time believing they can be forgiven of sin. Our God is a great God and can forgive any sin...as long as you are willing to turn and be forgiven.
View on Twitter
0
1

Venice (CA) church of Christ ·
@venicechurch
"Bring the entire tithe into the storehouse so that there may be food in my temple. Test me in this matter," says YHWH of Heaven's Armies, "to see if I will not open for you the windows of heaven and pour out blessing for you until there is no room for it all" (Malachi 3:10). https://t.co/5YAYnu1ytW
View on Twitter
1
1