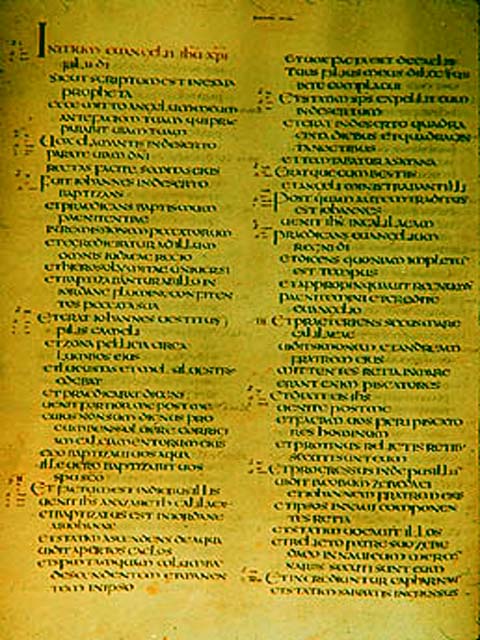 The Old Testament was originally written in Hebrew and Aramaic and translated into Greek before the days of Jesus; the New Testament was originally written in Greek. And yet it is the Romans, speakers of Latin, who ruled the first century world. The New Testament speaks of Latin only once, as one of the three languages in which Pilate had written the title on Jesus’ cross, “Jesus of Nazareth, the King of the Jews” (John 19:19-20). The Bible may not have been written in Latin, but the definitive translation of the Bible into Latin (called the Vulgate) proves influential in our reception and understanding of the Bible.

The Romans may have ruled the world, but Koine Greek remained the dominant language of the Mediterranean world; for this reason the Bible began to spread around the Roman world in Greek. In the first three centuries after Jesus Christians worked to translate parts of the Bible into Latin. These translations were mostly based on the Greek Old and New Testaments, and the translation work was of uneven quality based on various manuscripts. In 382 “Pope” Damasus I commissioned Eusebius Sophronius Hieronymus, whom we know as Jerome, to revise the Gospels of these translations held as the common text (Latin vulgata) as used in the church in Rome at the time; Jerome would, over time, revise not only the Gospels but also the Old Testament and the Apocrypha.

Jerome was one of the more learned Biblical scholars and textual critics of his day. Jerome began according to his commission by correcting the Gospels in Latin according to the most ancient texts at his disposal. Jerome aligned the order of the Gospels in Latin to conform to the order in Greek (it had previously been the “Western order,” Matthew, John, Luke, and Mark). After he completed the Gospels he turned his efforts toward the Old Testament. Whereas Christians before him focused on the text of the Old Testament in Greek, particularly in the Septuagint, Jerome believed it better to translate the Old Testament out of its original Hebrew. This decision would embroil Jerome in great conflict with others, including Augustine, who was concerned that Christians might be offended by hearing any variations on what they felt was inspired based on apostolic authority (Augustine, Letter LXXXII).

Jerome spent time in Jerusalem to strengthen his understanding of Hebrew and did much of his translation work in Bethlehem. He was able to secure one of the few copies of the Hexapla, Origen’s critical edition of the Old Testament, featuring six columns containing the Hebrew text, a transliteration of the Hebrew into Greek (with vowel reconstruction), and four translations of the Hebrew text in Greek (Aquila’s translation, Symmachus’ translation, the Septuagint, and Theodotion’s translation). Some have raised questions and doubts regarding Jerome’s competence in Hebrew, but he demonstrated strong familiarity with the language and developed a robustly conservative translation of the Old Testament from Hebrew into Latin.

Jerome is the one who called the extra works found in the Septuagint but not in the Hebrew Bible apocrypha:

This preface to the Scriptures may serve as a “helmeted” introduction to all the books which we turn from Hebrew into Latin, so that we may be assured that what is not found in our list must be placed amongst the Apocryphal writings. Wisdom, therefore, which generally bears the name of Solomon, and the book of Jesus, the Son of Sirach, and Judith, and Tobias, and the Shepherd are not in the canon. The first book of Maccabees I have found to be Hebrew, the second is Greek, as can be proved from the very style (Jerome, Preface to the Books of Samuel and Kings).

He found value in the apocryphal works and may have considered some of them inspired, but he sought to maintain a distinction between them and the books of the Old and New Testaments. If Jerome translated or revised the rest of the New Testament, it has not been preserved; it seems another translator revised the Vetus Latina edition and did so using older manuscript types.

After Damasus’ death Jerome’s work received no further official commendation; over the next 700 years many recognized the superiority of Jerome’s revisions, and only with Roger Bacon in the 13th century is Jerome’s revision called the vulgata. Ever since the Latin translations before Jerome’s day have been known as the Vetus Latina, or Old Latin, text; the Vetus Latina would remain preserved in many of the liturgical writings in the medieval church.

The Roman Empire was in the midst of collapse in Jerome’s day; knowledge of Greek would be lost to “Western” Christendom soon afterward, and it would be the Latin Vulgate which would be read and heard in churches throughout Western Europe. To Western Christians the Vulgate was “the Bible” until the time of the Reformation; the Roman Catholic Church made the Latin Vulgate its official Bible at the Council of Trent. Soon after a standardized text of the Vulgate was released by the Roman Catholic Church, the Sixto-Clementine (or Clementine) Vulgate; it remained the official text until the release of the Nova Vulgata in the middle of the twentieth century. The modern critical edition of the Vulgate, Biblia Sacra Vulgata, 5th edition, is also known as the Stuttgart Vulgate. Full copies of the Vulgate from the sixth century onwards are preserved along with many partial copies and evidence from early translations.

Despite what many people believe, most English translations of the Bible are not translations out of Latin; most modern versions translate the text from its original Hebrew, Aramaic, and Greek texts. Nevertheless, the influence of the Latin Vulgate remains, for many “theological” words which we find in the Bible come from the Latin, including creation, justification, sanctification, and, above all, testament. Many doctrines also derive from the ways in which the Bible was translated into Latin: penance comes from translating Greek metanoeo, repentance, as paenitentiae; imptutation comes from translating Greek logizomai, “to reckon or consider,” as imputatio. Even though translation of the Bible into common languages was a major emphasis of the Reformation, all the Reformers were shaped in their theology by the Bible in the Latin Vulgate.

The Latin Vulgate remains an important part of the family of Biblical texts. While our Bibles today are not directly translated from the Vulgate, the wording of the Vulgate and many of its ideas have shaped how we understand the text in English. The Latin Vulgate’s witness maintains its importance in the work of textual criticism, especially in the Old Testament. Jerome’s decisions to appeal to the Old Testament in Hebrew shifted the conversation about textual authority in the Old Testament; his convictions regarding the apocrypha did not win the day but proved influential over a millennium later. May we appreciate the work of Biblical study and translation in days of old, trust in what God has made known in the Scriptures, and be saved in Christ!

Becoming a Christian brought them out and said, “Sirs, what must I do to...