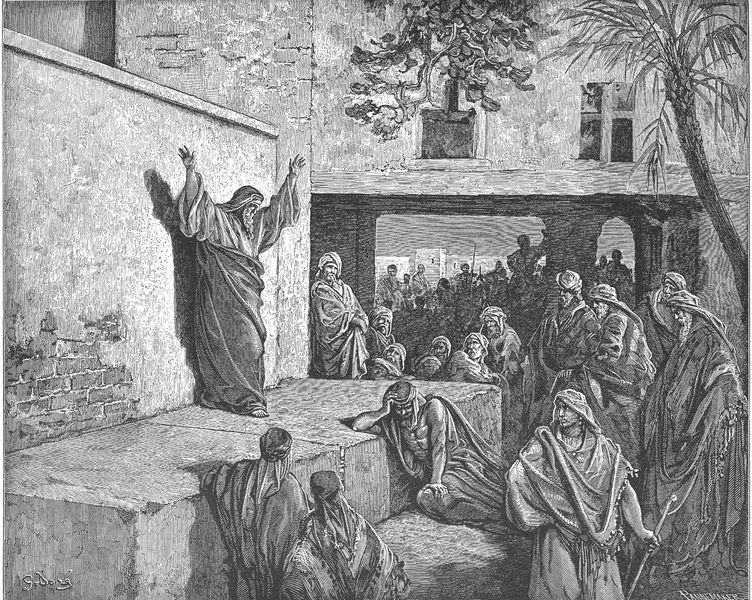 Walking in the Name of YHWH

The short-term forecast for Israel and Judah remained bleak: terrifying judgment on account of their idolatry, oppression, and other sins. Yet YHWH would remain faithful to His people; they would again walk in His name.

The Word of YHWH had come to Micah of Moresheth in the eighth century BCE; Micah 1:1-3:12 primarily presented YHWH’s indictment of Israel and Judah and warning regarding imminent judgment at the hands of the Assyrians. Some hope for future restoration had been extended in Micah 2:12-13. The rest of the Word of YHWH through Micah would present more hope yet also plenty of indictments, judgment, and woe for Israel and Judah (Micah 4:1-7:20).

Micah envisioned Zion as the most important mountain, to which people from many nations would come in order to learn the ways of YHWH. YHWH would judge among the people and they would turn weapons into farm implements (Micah 4:1-3; cf. Isaiah 2:2-4). Peace and prosperity would come for the nations, for YHWH had decreed it; other nations might serve their gods, but Israel should follow YHWH forever (Micah 4:4-5). YHWH would gather the disabled and the marginalized on that day and make a new nation of them; He would reign over them on Zion; Zion’s dominion would return (Micah 4:6-8).

But for now Jerusalem would groan: their king would disappear, and their pain and suffering would be great (Micah 4:9). They would go to Babylon, but YHWH would rescue them (Micah 4:10). Nations have gathered against Zion for violence and humiliation, but YHWH would defeat them and would crush many nations (Micah 4:11-13). They would first suffer siege and be struck on the face (Micah 5:1).

Micah then extended hope for Israel from Bethlehem, a place seemingly small in Judah, yet from which the King would emerge and rule over Israel (Micah 5:2). YHWH would hand His people over to their enemies until this King would be born; Israel would be re-unified; the King would shepherd Israel; they would live in security, and the King would be honored throughout the world and provide peace (Micah 5:3-4). If the Assyrians would invade, Israel would send rulers to rule over Assyria, the land of Nimrod, and their King would rescue Israel from any Assyrian invasion (Micah 5:5-6). Israelites would live in the midst of many nations and be as dew and as lions in the forest, not dependent on humanity but able to attack and strike; their enemies would be destroyed (Micah 5:7-9). YHWH would destroy Israel’s chariots, horses, cities, sorcery, and idols to cleanse His people from their sins (Micah 5:10-15).

But for the moment the people needed to again hear YHWH’s indictment (Micah 6:1-2). YHWH wanted to know how He had wronged His people or wearied them; He had rescued them from slavery and provided for them in the midst of enemies (Micah 6:3-5; cf. Exodus 1:1-Numbers 36:13).

Micah asked what he would need to bring in order to stand before YHWH: burnt offerings, rams, oil, his own firstborn child for sin and rebellion (Micah 6:6-7)? Micah said YHWH had told Israel what is good and what He desired from them: to do justice, love covenant loyalty, and live obediently before God (Micah 6:8).

YHWH spoke again to Jerusalem: He would not stand idly by while they use corrupt scales, commit violence, and lie to one another for dishonest gain (Micah 6:9-11). He would strike them terribly: they would eat but not find satisfaction; they would plant crops but not enjoy the harvest; they would work olives and grapes but not enjoy the fruit of that labor, for they have gone in the way of Omri and Ahab, and will thus be made a horror and a mockery among the nations (Micah 6:12-16; cf. 1 Kings 16:16-21:29).

Micah lamented his own suffering: he considered himself as harvesters with nothing to harvest (Micah 7:1). The faithful and godly have disappeared; everyone committed sin, did evil, and did not profit for righteousness (Micah 7:2-4). No one could trust anyone else; even one’s own spouse could not be trusted with secrets; family dynamics have been thoroughly disrupted, and a person’s enemies are in his or her own family (Micah 7:5-6). Micah would yet watch and wait for YHWH, assured He would hear (Micah 7:7). Micah warned his enemies to not boast over him, because he might have fallen and sits in darkness, but he would get up, and YHWH would be His light (Micah 7:8). We get the impression Micah is speaking for his people now, for he then spoke of how he must endure the anger of YHWH on account of his sin, yet he remained confident that YHWH would defend him and accomplish justice (Micah 7:9). His enemies would see this and be filled with shame. They may now ask where YHWH has gone, but they would eventually be trampled (Micah 7:10). Jerusalem would be rebuilt; Israel’s boundaries would be extended; people would come to Israel from Assyria, Egypt, the coasts, and the mountains (Micah 7:11-12). The earth would suffer desolation because of what its people did (Micah 7:13). Micah wanted God to shepherd His people and allow them to graze again in Israel; he wanted God to accomplish miraculous deeds as He did for their ancestors in Egypt; the nations would see and their strength would fail; they would humble themselves before YHWH (Micah 7:14-17).

Micah’s message concluded by asking who was a God like YHWH, forgiving sin, pardoning rebellion, a God who is not angry forever, but demonstrates covenant loyalty; a God who will have mercy on His people and will overthrow their sins (Micah 7:18-19). Micah remained confident in YHWH’s covenant loyalty to Abraham and Jacob according to the oath He made in ancient times (Micah 7:20).

All of what Micah foretold would come to pass. The Assyrians would devastate Israel and most of Judah, but would be humbled at the gates of Jerusalem; Judah would later go into exile in Babylon; the people would return to the land of Judah, but also many would remain dispersed among the nations. A King would arise from Bethlehem, Jesus of Nazareth, and He would be the Good Shepherd of the people of God, and reigns forever over His Kingdom of which there will be no end. YHWH proved faithful to His promises.

Yet people to this day continue to persist in iniquity; corruption and oppression remain. Trust proves difficult. Many wonder what they need to do in order to please God, if there even is a God; many others imagine God has wronged or wearied them. We therefore can gain much from YHWH’s word to Micah. If we want to please God, we must do what is just and right, love covenant loyalty, and live obediently before Him; we must wait patiently for Him, because He will judge the wicked and will be exalted in righteousness and holiness. We do well to come to heavenly Zion and learn of the God of Israel, to walk in His name, and obtain eternal life through Jesus His Son. May we trust in God in Christ and share in the resurrection of life!

A Crisis of Communication and Understanding It is becoming evident that the fundamental language and...