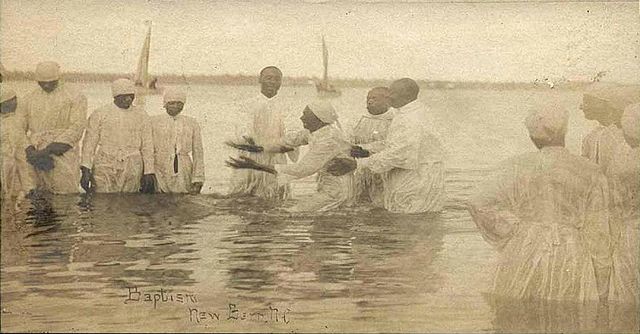 Baptism has become a quite controversial subject in the world of “Christendom.” Almost every group practices something they call baptism, but the mode, timing, and purpose of the action varies considerably. Some sprinkle water; others pour water. Some think it is an important symbol, but nothing more. Some do not even consider it a necessary practice and entirely spiritualize the concept. What did Jesus intend? What can we see from the examples in Scripture? What did the Apostles practice and teach on baptism? Why should a person be baptized?

Baptism is for the remission of sin. In Acts 2:38 Peter exhorts the Israelites who had heard the Gospel and believed in Jesus to be baptized in His name “unto the remission of [their] sins.” This is the exact same phrase Jesus used in Matthew 26:28 to explain the reason for the shedding of His blood upon the cross. Baptism has many correlative consequences and carries important spiritual meaning, but its purpose, established by the Apostles on the basis of the testimony of Jesus, is to receive the forgiveness of sins from God through the shed blood of Jesus.

We gain much from this instruction. One must have sin against them in order to need forgiveness from sin; thus, those who are infants, small children, and for whatever reason innocent and not morally culpable have no need to be baptized, for the Kingdom belongs to them (Matthew 18:1-5, Mark 9:33-37, 10:13-16). Baptism is done in “Jesus’ name,” or the name of the Father, the Son, and the Holy Spirit (cf. Matthew 28:18); one is thus baptized by Jesus’ authority in faith, critical for salvation (Mark 16:16, Acts 16:31, Hebrews 11:6). Such is why baptism is for believers and cannot precede one’s ability to believe and trust in Jesus as Lord and Christ. Furthermore, baptism has a purpose; if one is not baptized for that reason, then one has not really been “baptized” in the religious sense of the term, but has only gotten wet or taken a bath (cf. 1 Peter 3:21). Whereas “baptism” has become an almost exclusively religious term in English, its Greek antecedent was used to speak of ritual cleansing and laundry as well. Therefore, one can get bathed to join a church, to follow after their friends, etc., but one can only truly be baptized into Christ if it is done by His authority for the reasons for which He established it.

Baptism is “putting on Christ,” participating in His death and resurrection. In Galatians 3:27 Paul declares that those who have been baptized into Christ have “put on” Christ; in Romans 6:3-7, Paul likens baptism to a spiritual death and resurrection, putting to death the old man of sin so as to be raised to walk in newness of life.

In this way baptism is manifestly immersion, not sprinkling or pouring. Neither sprinkling nor pouring are first century meanings for the Greek term baptizo (“to dip, immerse”). Paul’s image of baptism as burial only makes sense in terms of immersion (Romans 6:3-7). Furthermore, baptism represents the transformative moment of conversion. Baptism is rendered meaningless if it is not preceded by belief, confession, and repentance (Acts 2:38, 16:16, Romans 10:9-10); likewise, one has not truly trusted in Jesus and has not made good on their confession if he or she has not responded in faith the way Jesus decreed, and while repentance charts a path forward in following Jesus, it can do nothing to provide forgiveness for the transgressions of the past. Such is why Jesus and the Apostles recognize a person as having been made a disciple when they are baptized into Christ, for they now share spiritually in His death and resurrection and now wear Him like a garment. Before baptism, one is still in the world as the man of sin; after baptism, one walks in newness of life!

Baptism is the normative response of faith upon hearing the Gospel in the first century. In the book of Acts, when people hear the Good News of Jesus of Nazareth and believe it, they are baptized. Such was the response of faith by the Jews on the day of Pentecost (Acts 2:37-41), the Samarians (Acts 8:12), the Ethioipian eunuch (Acts 8:36-39), Saul of Tarsus (Acts 9:17-19), Cornelius and his men (Acts 10:47-48), the Philippian jailer and his family (Acts 16:33), John the Baptist’s disciples in Ephesus (Acts 19:5), the Roman Christians (Romans 6:3-7), the Corinthian Christians (1 Corinthians 1:14-17), and the Galatian Christians (Galatians 3:27). Many today encourage those who would believe in Jesus to pray a prayer (the “sinner’s prayer”) or do some other such thing, but we do well to recognize that first century believers were baptized in order to become part of Jesus. Likewise, baptism is a human response and is thus water baptism, not the “baptism of the Holy Spirit” which was poured out by God only in specific circumstances for His specific sovereign purposes (Acts 1:4-8/2:1-39, 10:43-47/11:15-17).

Baptism saves. Such is what Peter declares in 1 Peter 3:21. Neither Peter nor Paul nor any other Apostle insisted that baptism alone saves; neither faith alone, nor confession alone, nor repentance alone, nor any other thing “alone” saves. One must believe, confess, repent, be baptized, and follow the Lord Jesus until the end in order to be saved (ibid., Matthew 10:22, 1 John 2:6).

Baptism does not save because the water has magical properties; one cannot submit to baptism with a view to earn or merit salvation and be pleasing to God. Baptism saves because one has put one’s trust in Jesus as Lord, has orally declared as much, has proven willing to change one’s mind for the better, to follow the Lord Jesus, and one wishes to submit to God’s will in Christ. In baptism one demonstrates before God an appeal to be cleansed from sin through Jesus’ blood, to be reckoned as righteous on account of that forgiveness, and obtain standing before God as part of the body of Christ. Baptism does not guarantee salvation; nevertheless, one searches the Scriptures in vain to find believers in the new covenant who were saved without having been immersed in water in Jesus’ name for the forgiveness of their sins.

God in Christ has given us every reason to believe in Him and respond in faith by submitting to immersion in water by His authority for the forgiveness of sin. If you have not done so, would you please consider putting on Christ in baptism and participating in the life of His body, the church, and receive the hope of the resurrection and eternal life?