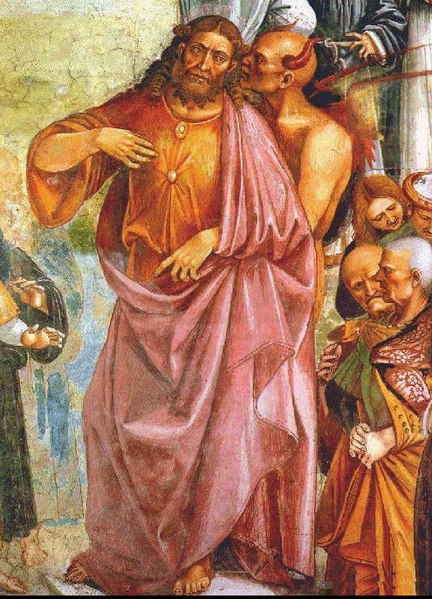 Works of the Flesh: Divisions

The Apostle Paul encouraged the Christians of Galatia to live according to the Spirit and crucify the flesh and its passions; in so doing Paul set forth contrasting feelings, behaviors, and character traits described as the “works of the flesh” and the “fruit of the Spirit” (Galatians 5:17-24). Such exhortations are important for Christians of every time and place. Paul deemed the following as the “works of the flesh” in Galatians 5:19-21:

Many of the first “works of the flesh” centered on challenges and temptations which would prove especially acute for Christians who had recently come out of the Greco-Roman pagan milieu: sexual temptations like sexually deviant behavior, uncleanness, and lasciviousness; idolatry; and sorcery. Paul has now turned to discuss “works of the flesh” which prove especially pernicious in relationships: enmities, strife, jealousy, wrath, and rivalries. He continued in the same theme with divisions.

The word translated here as “divisions” is the Greek word dichostasia, defined in Thayer’s Lexicon as “dissension, division.” Paul would use the same term on two other occasions: in encouraging the Christians in Rome to “mark” those causing such “divisions” contrary to the doctrines which they had learned in Romans 16:17, and to indict the Corinthian Christians for having the fleshly influences of jealousy and dissensions as manifest in factionalism in 1 Corinthians 3:3. Dichostasia and hairesis, “parties or sects,” the next listed “work of the flesh,” are extremely similar in meaning, and can refer to different aspects of the same process or event (cf. 1 Corinthians 11:19).

From before the beginning God’s purpose has involved reconciling humanity to Himself and to one another in Jesus (John 14:1-3, 21-23, 17:20-23, Ephesians 1:3-13, 2:11-3:12). Dissension and division work entirely against unity and manifest the work of the powers and principalities (Ephesians 6:12). Division and dissension mean the failure of striving to maintain the unity of the Spirit in the bond of peace (Ephesians 4:3); any time division or dissension rears its head we should lament and mourn.

When we think of dissensions and divisions, matters of doctrinal disagreement often come to mind (Romans 16:17). On the surface it might seem Paul is contradicting himself: if the goal of the faith is to be unified in Christ, how can he exhort the Roman Christians to mark and avoid people? Paul explained well in Romans 16:18: those who foment division and dissension and would cause Christians to stumble no longer serve the Lord Jesus Christ but their own fleshly desires. Jesus indeed died to reconcile all people to and in Himself (Ephesians 2:11-22); the ground of reconciliation is in Christ, and outside of Christ, such reconciliation cannot exist (cf. 1 John 1:1-2:27). To this end Christianity has always been a confessional community, a group of people who have come together as a spiritual family based upon what they share in common confession about Jesus (cf. 1 Timothy 3:15-16). The Apostles and their associates felt compelled to constantly warn Christians about the dangers of these false teachers who would lead Christians away from Jesus in order to satisfy their desires, lusts, and vanity (1 Timothy 4:1-5, 6:3-10, 2 Peter 2:1-22, Jude 1:3-19). Thus, Christians who would remain unified with one another in Christ must mark and separate themselves from anyone who would lead them away from Jesus. In so doing the Christian is not manifesting dissension or division; the one bringing the cause of stumbling bears responsibility, and his or her judgment from God will be sharp.

While doctrine is important in establishing the ground on which we remain one in Christ, relational unity in Christ involves far more than agreement on doctrine (Ephesians 4:1-3, Philippians 2:1-4). Paul upbraided the Christians in Corinth for their worldliness and behavior according to the flesh as divisive (1 Corinthians 3:3): primarily in their factions with each supporting a particular preacher (Apollos, Cephas, Paul), or the “faction” of Christ (1 Corinthians 1:12, 3:21-23), but no less manifest in accepting a man who had his father’s wife (1 Corinthians 5:1-13), taking each other to court (1 Corinthians 6:1-8), the knowledgeable causing those less understanding to stumble (1 Corinthians 8:1-13), displaying class divisions in partaking of the Lord’s Supper (1 Corinthians 11:17-34), exercising spiritual gifts immaturely (1 Corinthians 14:1-40), and disregarding fellow Christians deemed more common or unpresentable (1 Corinthians 12:12-28). And yet Paul has called the Corinthian Christians to speak the same thing, to have no divisions, and to have the same mind and judgment (1 Corinthians 1:10).

Whereas it is always open season on the Corinthian Christians as the “problem church,” we do well to be careful lest we fall according to the same pattern. We, like them, can fall prey to cults of personalities and give more emphasis to the preacher than is proper. Christians have fallen into sin and have not been disciplined; Christians have taken each other to court; plenty of Christians are made to feel as less than valuable or worthy in the Kingdom. Even as Christians we easily and naturally have disagreements about a host of matters: liberties and things of no consequence to God, as in Romans 14:1-23; the means by which we accomplish what God has commanded for us to do in Christ; personality conflicts; different emphases and priorities based on different experiences and backgrounds; and so on. The very power of the Kingdom in bringing together people from every nation, heritage, and background can be its undoing when its members allow differences and distinctions to overcome the shared faith maintained in Christ. In Philippians 2:1-5 Paul well set forth how it is possible for Christians to be of the same mind and judgment: not in an expectation of agreement on every issue and method, but based in mutual love, care, concern, and respect, marked by a willingness to sublimate one’s own views and desires under that of others for the good of others and the whole.

If we chafe under the suggestion of setting aside our own views for the good of others and the whole, such is most likely our worldly, fleshly nature speaking. American Christians in particular find it challenging to renounce and sacrifice freedoms and liberty for the benefit of the whole; everything in their society exalts freedom and the individual, and thus concern for the community and the common good remains countercultural and counterintuitive. If our ability to work together in Christ is dependent on our full acceptance, agreement, or comfort, we are not considering, honoring, and valuing one another in love. It is when we make peace and no longer insist on our own way that we most fully embody the Lord Jesus (Romans 15:1-3).

For good reason Paul encouraged Christians to be diligent to maintain the unity of the Spirit in the bond of peace (Ephesians 4:3): unity requires great effort. We cannot maintain joint participation with those who do not share in Christ and would turn Christians away from Him. But we also cannot insist on our own way, but must give thought and consideration for what makes for peace among the Lord’s people in joint participation in faith. Unity demands strength in relationships, and strong relationships take time and effort to cultivate. Years of patient, hard work can be easily undone in a few rash moments of dissension and division. May we always be on guard against our tendencies toward division and dissension, and seek to work together in humility and love in Christ to the glory of God the Father!

The Spiritual Forces of Darkness For our wrestling is not against flesh and blood, but...

Daniel What would come of Israel in exile? How would God’s people live among potential...